Democratic Michigan Gov. Gretchen Whitmer is warning that her state may “dial back” its coronavirus reopening if the contagion’s resurgence continues.

“I want to reengage this economy more than anyone, but I’m not going to do it if it is too risky to do so,” she told CNN’s “New Day” Tuesday morning. “I’m not going to be bullied into moving before it’s safe, and if we have to move back, we’re gonna.”

She said she didn’t want to see the state’s recovery lose ground after the devastating economic impact that coronavirus-related shutdowns had on businesses and municipalities.

“I would hate to think that this sacrifice that we have made would be made in vain because some people are losing interest or are dropping their guard,” she said during the interview. “We’ve got to double down right now more than ever.”

Michigan has seen more than 66,000 confirmed coronavirus cases and over 6,000 deaths attributed to the illness, according to state authorities. More than 22,000 of those cases and over 2,600 deaths happened in Wayne County, which includes Detroit. 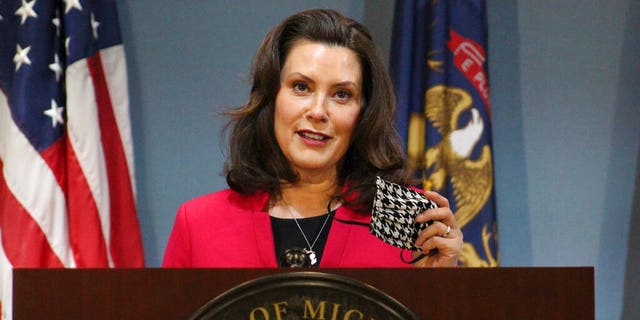 Last week, Whitmer announced that Michigan was once again halting indoor service at bars across a large swath of the state’s southern region in response to outbreaks that she said had ties to such establishments. On the same day, she signed a bill into law that legalized the sale of “cocktails-to-go.”

“If we open up our economy too quickly, the efforts of the last three months will be for nothing and we will have to go through this pain all over again and put our economy, health and medical system at risk,” she said. “Nobody wants to move backward. Everyone, please do your part, and let’s show the nation and the world how smart we are.”

Last month, a federal appeals court sided with Whitmer against a group of gym and fitness center owners who had sued in a bid to force the state to let them reopen their businesses.

Like state and federal health authorities around the country, the governor has been urging residents to stay home if they’re sick, maintain good hand-washing hygiene, practice social distancing of at least 6 feet and wear a mask or face covering in public.