It would be the seminal vote of the year in Congress.. For only the third time in history, senators would rise from their desks and declare “guilty” or not “guilty in the impeachment trial of President Trump……

They spilled into the streets by the tens of thousands, from Lafayette Square across from the White House to Boise, Idaho. The demonstrators eschewed social distancing guidelines as they argued for justice and police reform following the death of George Floyd…….

It’s only mid-June. And we don’t really know what may define the November elections.

No one could have imagined something toppling the echoes of the impeachment trial from its pedestal back in February. Then came the double whammy of a pandemic and an unprecedented economic shock. That duo seemed to encapsulate the seminal political guidepost ahead of November. But now we’re in the aftermath of protesters storming the streets. That’s why Congress quickly pivoted to trying to find a legislative solution to curb police abuse.

Congressional Democrats quickly unveiled a sweeping bill which is likely to hit the House floor before the end of June. But on the same day Democrats rolled out their legislation, they managed to hijack their own message.

The bill weakens the criminal and civil immunity shield for police. It bars chokeholds. The legislation also forms a database to track troubled officers who bounce from department to department. But you might not know any of that because Democrats found themselves trying to explain a push from the left to defund police. 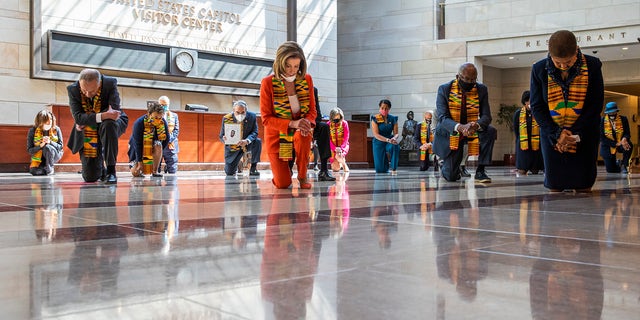 House Speaker Nancy Pelosi of Calif., center, and other members of Congress, kneel and observe a moment of silence at the Capitol’s Emancipation Hall, Monday, June 8, 2020, on Capitol Hill in Washington, reading the names of George Floyd and others killed during police interactions. (AP Photo/Manuel Balce Ceneta)

The casual political observer may presume that defunding police is a component of the legislation. It’s not.

Democrats superseded their own message of muscular police reform — which is hard to oppose — and presented Republicans an opportunity just as fibrous.

“They know it is pure insanity to defund the police. And the fact that my Democrat colleagues won’t speak out against this crazy policy is just that frightening,” said Rep. Jim Jordan, R-Ohio, at the first House hearing on police reform last Wednesday.

House Democratic leaders cautioned their rank-and-file members against getting siphoned into a conversation about defunding the police. Democrats tried to pin the onus on Republicans.

By the same token, Republicans knew they just couldn’t idly sit by as protesters roamed the streets. House Republicans were nearly silent in their criticism of the Democrats’ bill. They fear further alienating swing or minority voters. President Trump’s polling numbers are dropping after the pandemic and economic plunge. Congressional Republicans fret they could go down with Trump.

McConnell empaneled the lone black Senate Republican, Sen. Tim Scott, R-S.C., to craft a police reform bill. Scott said there was “synergy” between his plan, the Democratic bill and views held by Trump.

“We want our actions to speak louder than our words,” said White House Chief of Staff Mark Meadows after huddling with Scott on Capitol Hill.

Scott’s bill will likely have to wend its way through the Senate Judiciary Committee, chaired by Sen. Lindsey Graham, R-S.C.

“What I want to do is give [President Trump] something bipartisan,” said Graham. “If it’s reasonable, he’ll sign off on it.”

No one completely understands yet how protests and the in-custody death of George Floyd will impact the electorate this fall. Perhaps that’s why Graham hopes to forge a bipartisan compromise. Graham’s running for reelection against Democratic nominee Jaime Harrison. The race is still a longshot for Harrison to unseat Graham. But the contest could become increasingly competitive in this environment. That’s why GOPers are striving to get their own police reform plan ready as soon as possible.

It’s also why Democrats are struggling with calls to defund the police.

Sen. Tom Cotton, R-Ark., took to the Senate floor last Wednesday in an attempt to get the Senate to approve, via unanimous consent, a measure seeking justice for George Floyd and opposing efforts to defund the police. Schumer objected. Cotton said he presumes Schumer blocked the measure “because he must want to defund the police.”

Talk of defunding the police fractures the Democrats’ tenuous coalition of urban liberals coupled with suburban moderates and swing voters.

“There’s no doubt that the language of defunding or dismantling the police is explosive,” said Dr. Larry Jacobs, director of the Center for the Study of Politics and Governance at the Hubert Humphrey School of Public Affairs at the University of Minnesota. Jacobs says if Democrats push this issue, “they’re going to have a hard time winning in November.”

Democrats dominated the suburbs, winning so-called suburban soccer moms in the 2018 midterm elections. Voters were disaffected with President Trump. That helped fuel the Democratic takeover of the House. Suburban voters could interpret police defunding as too extreme. Democrats fear those voters could abandon the party.

Congressional Democrats tried to distance themselves from the police defunding movement.

“Nowhere in this country are we going to find ourselves without police,” said Rep. Ruben Gallego, D-Ariz. “That’s just not rational nor a realistic thing. We will always have a police force as long as we’re not living in a Utopia.”

This crystallizes the internal Democratic party divide. Rep. Alexandria Ocasio-Cortez, D-N.Y., tweeted that Democrats are trying to “repackage” the defunding conversation to make it “palatable for largely affluent swing voters.” Ocasio-Cortez accused Democrats of valuing suburban voters over urban ones.

This could spell trouble for Democrats. Nowhere is that more prominent than a battleground state like Minnesota. President Trump put little effort into winning Minnesota in 2016. He lost to Hillary Clinton by fewer than 45,000 votes. Minnesota is now the flashpoint of American politics after the death of George Floyd. The Minneapolis City Council voted in favor of dismantling its police force. Could all of this volatility over defunding the police spell consequences for Sen. Tina Smith, D-Minn., running for a full-term this fall? What about Rep. Angie Craig, D-Minn., who flipped a district from red to blue in 2018? And Rep. Collin Peterson, D-Minn.? He represents the most pro-Trump House district held by any Democrat in the country.

“If Minneapolis were to actually pursue and adopt a ‘defund-the-police’ position, that could unnerve suburban voters. (It) would unnerve some of the greater Minnesota voters who have been behind Democrats in the past,” said Jacobs. “There’s no doubt there’s an opportunity for Republicans to seize on it. The question is, will it be an opportunity that lasts (until) November? I think it’s possible there will be legs on this story.”

Former Vice President Joe Biden opposes defunding the police. So, expect Republicans to stoke the “defund-the-police” embers. It could frighten voters in the middle and may even suppress liberals if the Democratic nominee isn’t in line.

It’s only June. We may still not know what factors could sway the November election.

The repeated, cosmic, radio bursts from space kept baffling scientists. But in July, the extraterrestrials arrived from the planet Xantar. They pierced the Earth’s atmosphere in a fleet of sleek, cigar-shaped spaceships, transiting through a wormhole near the Canis Major Dwarf Galaxy……..

Gates: Obama, GWB used military as a prop — but Trump administration takes those efforts to ‘a new level’

UK seeking US congressional support in coordination of $14B nuclear warhead…