President Trump on Saturday addressed the graduating class at the U.S. Military Academy at West Point, telling them they are the “bravest of the brave” and hailing the durability of America’s institutions “against the passions and prejudices of the moment.”

“To the eleven hundred and seven cadets who today become the newest officers in the most exceptional Army ever to take the field of battle, I am here to offer America’s salute. Thank you for answering your nation’s call,” he said.

The address at West Point in New York was the one remaining military service academy where he had yet to give a graduation address.

“This premier military academy produces only the best of the best — the strongest of the strong — and the bravest of the brave,” he said. “West Point is a universal symbol of American gallantry, loyalty, devotion, discipline, and skill.” 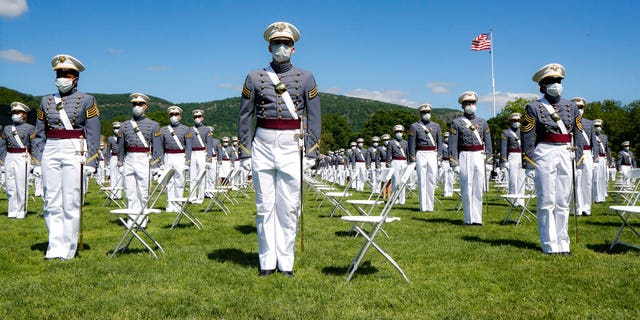 Trump’s speech comes amid a backdrop of dueling crises of the coronavirus pandemic and recent protests and questions about police conduct related to the recent death of George Floyd in police custody.

He made a number of references to national unity, telling the graduates that they “exemplify the power of shared national purpose to transcend all differences and achieve true unity.”

Later, he hinted at the instability rocking the country:

“What has historically made America unique is the durability of its institutions against the passions and prejudices of the moment. When times are turbulent, when the road is rough, what matters most is that which is permanent, timeless, enduring and eternal,” he said.

On the topic of foreign policy, Trump declared that his administration is “restoring the fundamental principle that the job of the American soldier is not to rebuild foreign nations, but defend — and defend strongly — our nation from foreign enemies.”

“We are ending the era of endless wars. In its place is a renewed, clear-eyed focus on defending America’s vital interests. It is not the duty of U.S. troops to solve ancient conflicts in faraway lands that many people have never even heard of,” he said.

In a lighter moment, he drew applause when he used his power as commander-in-chief to absolve “all cadets on restrictions for minor conduct offenses, and that is effective immediately.”

The address comes amid tensions between Trump and the military. Trump reportedly yelled at Defense Secretary Mark Esper for opposing his call to use active-duty troops to quell rioting. Meanwhile, Gen. Mark Milley, the Joint Chiefs of Staff chairman, said it was a “mistake” to accompany Trump on a trip to St. John’s Church on June 1.

Critics had accused Trump of putting cadets at risk of coronavirus for the purposes of a photo opportunity. A group called Veterans For Peace held a protest outside West Point’s main gate against what it called “Trump’s dangerous narcissistic Photo-Op Stunt at the West Point Graduation.”

But Army officials defended the move, saying the cadets would have had to brave the health risks of traveling back to campus anyway for their final medical checks, equipment and training. The cadets had been home since spring break, just before the coronavirus was declared a pandemic. They returned to campus in late May.

A number of health precautions were in place to stop the spread of the highly contagious virus. The recently commissioned second lieutenants wore masks as they marched onto West Point’s parade field, instead of into Mitchie Stadium, the longtime commencement venue.

They were also sitting six feet apart, and saluted the president instead of shaking hands. Meanwhile, there were no guests, with family and friends watching online instead.

Cuomo tells New Yorkers to stay ‘smart’ on coronavirus, before warning revelers: ‘Don’t make me come down there’

Conway mocks Biden call for enforced masking: ‘The best he can…

Pelosi urges Congress to remove Confederate statues in a letter