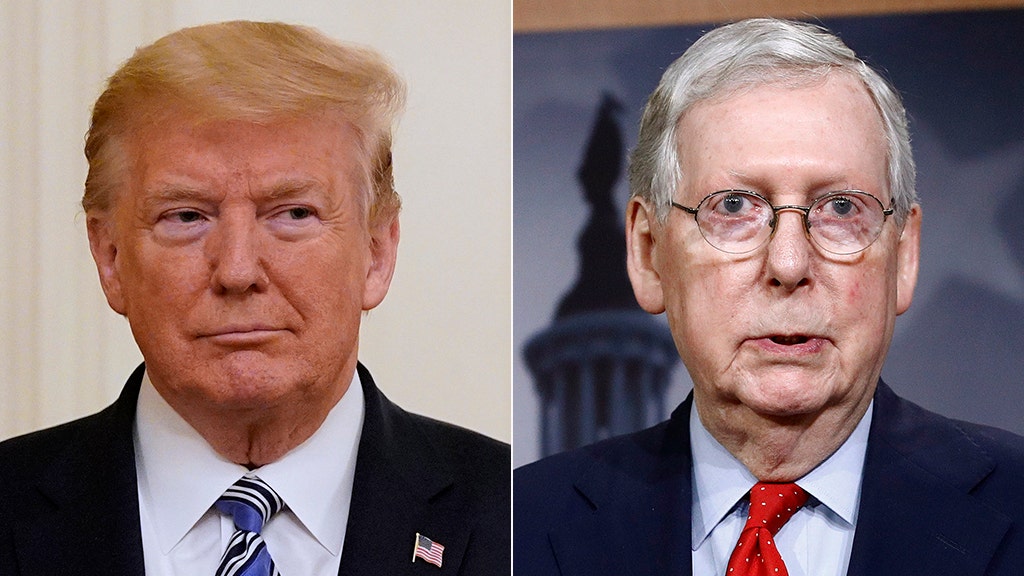 President Trump told Senate Majority Leader Mitch McConnell, R-Ky., that he “love[s]” him but that he should quickly move to hold accountable the people behind the “Russia collusion hoax.”

Trump had retweeted an article by Fox News contributor Mollie Hemingway in the Federalist, shared by editor Sean Davis, which argued that McConnell wouldn’t be able to confirm more judges or maintain a Republican majority without addressing the issue.

“Mitch, I love you, but this is 100% true,” Trump tweeted. “Time is running out. Get tough and move quickly, or it will be too late. The Dems are vicious, but got caught. They MUST pay a big price for what they have done to our Country. Don’t let them get away with this!”

Trump also tagged Senate Judiciary Committee Chairman Lindsey Graham, R-S.C., who was mentioned in the article. Hemingway argued that Graham’s work ethic was lacking while McConnell was shirking his responsibilities as a senate leader.

“The Senate can subpoena records and compel testimony — holding hearings if necessary — to get to the bottom of the effort from inside the U.S. government to use a false and dangerous conspiracy theory that threatened the health and safety of the republic,” Hemingway wrote.

“If that’s not the Senate’s business, what in the world is? And if the Senate majority leader won’t care even about how this scandal uniquely harmed Republican voters, then who will?”

During Thursday’s “Special Report,” McConnell suggested that it was Graham’s responsibility to investigate former President Obama’s role in the Russia probe — something that caught renewed attention after the Justice Department moved to dismiss the case against former National Security Adviser Michael Flynn. Obama administration officials also reportedly sought to unmask Flynn, or reveal his identity in intelligence reporting on Russian ambassador Sergey Kislyak.

Flynn has been fighting a years-long legal battle after he misled the FBI about his contacts with Russia. Recently unveiled documents, however, showed the FBI contemplating whether its intent was to prompt a lie from Flynn in hopes of getting him fired.

It’s been almost a year since former Special Counsel Robert Mueller’s portion of the Russia investigation ended. The Ukraine controversy sidelined House Democratic efforts to further the investigation, although Democrats have indicated they will continue pursuing the issue.

Meanwhile, Attorney General William Barr has been pursuing a counter-investigation exploring the origins of the former administration’s Russia probe. While it’s unclear how the Senate will proceed, Trump has called on Graham to have Obama testify. Graham, however, has already indicated he’s not interested in doing that.

In an interview on the “Brian Kilmeade Show” with host Brian Kilmeade, Graham said that he does not want to “wreak havoc on the institution” like House Intelligence Committee Chairman Adam Schiff, D-Calif., did during the impeachment trial against the president earlier this year.

“So, if I find something that makes me suspicious of President Obama, if he may have been part of committing a crime against General Flynn or anyone else, I will turn that over to Mr. [John] Durham,” he promised, referring to the U.S. attorney who is investigating the origins of the Trump-Russia probe.