Trump rips Jeff Sessions, backs his Senate-runoff opponent: ‘He let our Country down’

If former Attorney General Jeff Sessions – now running to regain a U.S. Senate seat in Alabama — was hoping to reconcile with President Trump and gain his endorsement, that hope seemed to evaporate Friday night.

“3 years ago, after Jeff Sessions recused himself, the Fraudulent Mueller Scam began,” Trump wrote on Twitter. “Alabama, do not trust Jeff Sessions. He let our Country down. That’s why I endorsed Coach Tommy Tuberville (@TTuberville), the true supporter of our #MAGA agenda!”

The president’s tweet included a link to Tuberville’s campaign-donation site, and retweeted a Tuberville post from last Sunday, promoting his campaign.

Trump previously endorsed Tuberville in March, after Tuberville garnered the most votes in the state’s GOP Senate primary, AL.com reported. But because Tuberville did not attract support from an outright majority, he will face Sessions – the No. 2 finisher in March – in the July runoff.

The runoff was initially scheduled for March 31 but was rescheduled to July because of the coronavirus outbreak.

Back in March, Sessions brushed off Trump’s decision to back his opponent.

“Of course, President Trump can endorse anyone he chooses for the U.S. Senate election in Alabama,” Sessions tweeted at the time. “But the Constitution expressly empowers the people of Alabama, and only them, to select their Senator. I intend to take my case directly to the people of Alabama.” 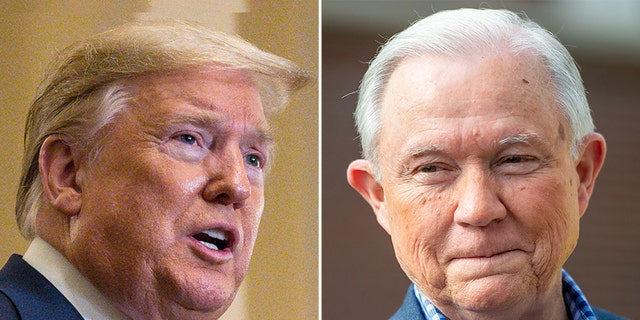 President Trump’s relationship with Jeff Sessions soured after Sessions recused himself from the Russia investigation.

“Look, I know your anger, but recusal was required by law,” Sessions wrote. “I did my duty & you’re damn fortunate I did. It protected the rule of law & resulted in your exoneration. Your personal feelings don’t dictate who Alabama picks as their senator, the people of Alabama do.”

“Tuberville’s a coward who is rightly too afraid to debate me,” Sessions wrote. “He says you’re wrong on China & trade. He wants to bring in even more foreign workers to take American jobs. That’s not your agenda and it’s not mine or Alabama’s. I know Alabama. Tuberville doesn’t.”

Sessions, 73, represented Alabama in the U.S. Senate from 1997 to 2017 but resigned when Trump appointed him U.S. attorney general. Sessions had been one of the first high-profile Republicans to endorse Trump’s 2016 presidential campaign.

But Sessions resigned as attorney general in November 2018. His relationship with Trump soured after Sessions recused himself from the Russia investigation, paving the way for the appointment of former FBI Director Robert Mueller to lead a probe that tormented Trump for two years.

Sessions was ultimately succeeded by William Barr, who became attorney general in February 2019. Matthew Whitaker led the Justice Department on an interim basis between Sessions’ departure and Barr taking office.

The winner of the Sessions-Tuberville runoff will face Democratic incumbent Sen. Doug Jones.

Pelosi says Republicans ‘trying to get away with murder’ of George…