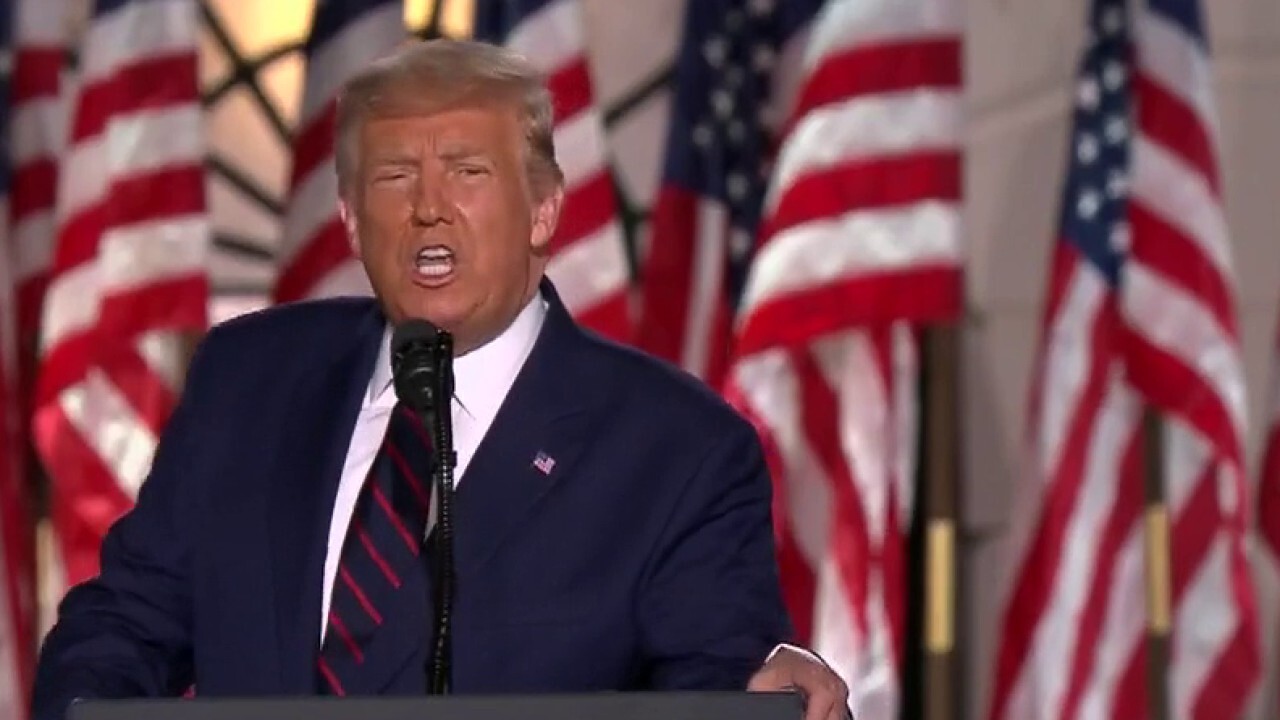 With the Republican National Convention wrapping up Thursday night, President Trump is hoping for a momentum boost as the election season moves into its final stages and both major political parties dig in for what is expected to be a vicious battle for the future of America over the next 67 days.

Both the Democratic and Republican conventions over the last two weeks saw the parties lay out their main lines of attack that Trump and Democratic presidential nominee Joe Biden will use against one another as the country approaches Election Day on November 3.

The Biden campaign and Democrats have sought to paint Trump as an unstable leader who has failed to properly address the novel coronavirus pandemic and who has inflamed a torn nation by stoking racial unrest and an ever-widening partisan divide through his “law and order” agenda and inflammatory rhetoric.

During his speech, Trump drew an optimistic portrait of the country under his tenure in the White House while driving home the GOP’s main attacks against Biden: that the former vice president is a puppet for the Democratic Party’s more radical wing who does not support law enforcement and would allow the unrest in cities across the country to further escalate.

“We have spent the last four years reversing the damage Joe Biden inflicted over the last 47 years,” Trump said. “At no time before have voters faced a clearer choice between two parties, two visions, two philosophies or two agendas.”

The Democratic agenda, he added, “is the most extreme set of proposals ever put forward by a major party nominee.”

The stark contrast Trump tried to portray in his speech was echoed throughout the week as speaker after speaker at the RNC criticized the protests – and the subsequent looting and rioting – that occurred following the death of George Floyd in Minneapolis police custody and, more recently, the police shooting of Jacob Blake in Kenosha, Wis.

The cases of both Black men fueled allegations of police brutality and racial injustice, and protests have escalated into looting and violence in many places. Singling out cities like Portland and New York, South Dakota Gov. Kristi Noem said during Thursday night’s convention that cities were “overrun by violent mobs” and heaped blame on “Democrats and their radical supporters.”

IVANKA TRUMP PRAISES HER FATHER AS THE ‘PEOPLE’S PRESIDENT’

“It took 244 years to build this great nation,” Noem said in a pre-recorded speech from the Mellon Auditorium in Washington, D.C. “But we stand to lose it in a tiny fraction of that time if we continue down the path taken by the Democrats and their radical supporters.”

Noem added: “Democrat-run cities across this country are being overrun by violent mobs. The violence is rampant. There’s looting, chaos, destruction, and murder.”

The raging protests in Wisconsin this week are in response to the shooting of Blake, 29, who was shot in the back seven times on Sunday as he leaned into his SUV, with three of his children seated inside. Kenosha police have said little about what happened other than that they were responding to a domestic dispute, but state agents later recovered a knife from the driver’s side floorboard of the vehicle.

While Republicans focused much of their attacks on claims that the violence and unrest in cities would only get worse – and spread to suburban areas – if Biden is elected, Democrats – both at their own convention last week and in their response to the RNC – honed in their sights on what they say are Trump’s failures at combatting the coronavirus pandemic.

As of Thursday, there were over 5.8 million confirmed cases of COVID-19 in the U.S. with more than 180,000 deaths related to the virus. The next closest countries in the world were Brazil and India with 3.7 million and 3.3 million respectively, according to figures compiled by Johns Hopkins University.

On Thursday, staffers for the Biden campaign were quick to rail on Trump’s speech – hammering him once again on the coronavirus and questioning his response.

“Zoned out and then heard ‘Wyatt Earp. Annie Oakley. Davie Crockett,’” Andrew Bates tweeted in reference to Trump naming the American frontier heroes. “But still no plan to defeat the pandemic or end the division and violence in our cities that one of his closest advisers celebrated today.”

Democratic National Committee Chair Tom Perez also weighed in on social media, where he criticized Trump for the economic downturn the virus has caused.

Both the coronavirus, which has affected almost every aspect of life in the U.S. since the outbreak began in the country in late winter, and the racial unrest following the deaths of Floyd, Blake and other Black Americans at the hands of police. The two issues will likely be featured during the first presidential debate, which scheduled for Sept. 29 in Cleveland, Ohio.

But before Trump and Biden face-off on the debate stage, the two candidates will ramp up their in-person campaigning. The president has already held a number of in-person rallies in key battleground states, but Biden has mostly kept his campaigning virtual amid the pandemic.

That, however, appears to be changing with the former vice president saying on Thursday that he will begin to hold in-person events in battleground states, depending on state regulations on gatherings, beginning after Labor Day.

“Here’s the deal. We plan on, without jeopardizing or violating state rules about how many people can in fact assemble,” Biden said during a virtual fundraiser. “One of the things we’re thinking about is I’m going to be going up into Wisconsin, and Minnesota, spending time in Pennsylvania, out in Arizona. But we’re going to do it in a way that is totally consistent with being responsible, unlike what this guy’s doing.”

Fox News’ Allie Raffa and The Associated Press contributed to this report.

Juan Williams says Trump’s RNC speech ‘felt like a rerun’: ‘We’ve seen so many of those lines before’

Hannity, Ingraham among 13 monitored by Kiev embassy for Twitter posts…