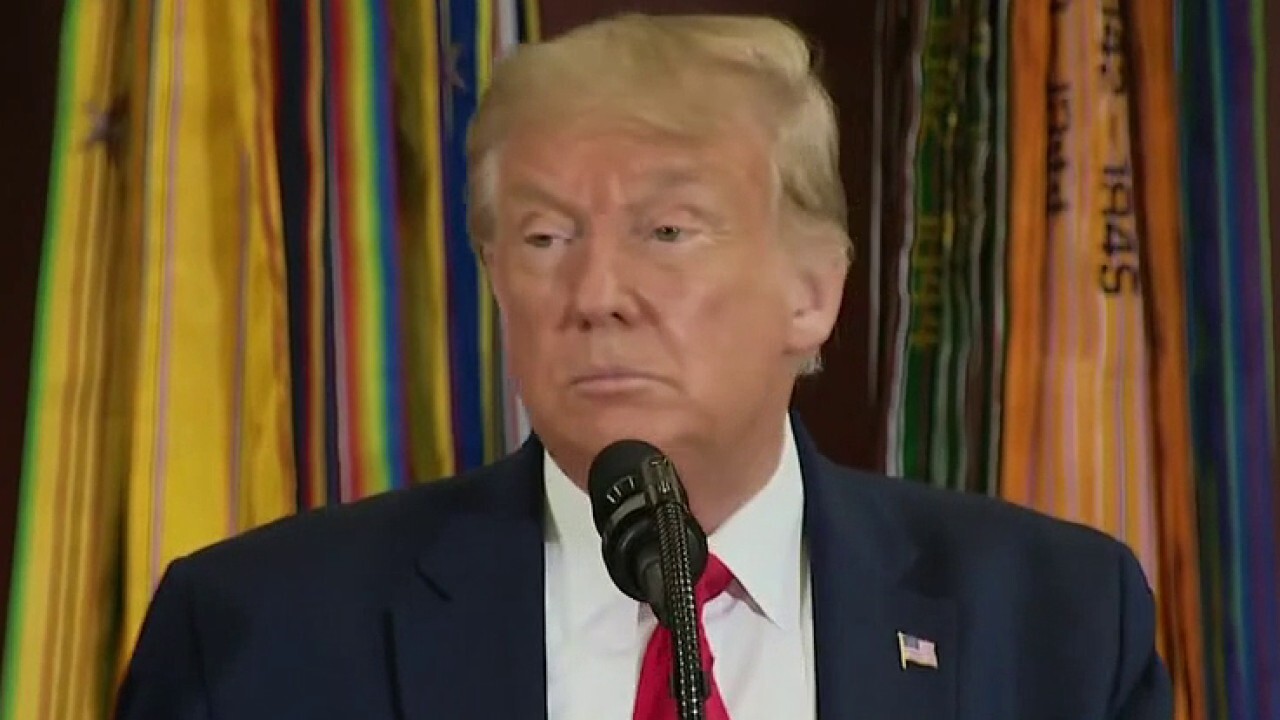 President Trump on Friday, in a roundtable meeting with Venezuelan expatriates in Florida, took aim at Democrats — calling them “the party of socialism and worse” as he seeks to draw a distinction on issues such as funding law enforcement and tearing down statues.

Speaking to Venezuelan nationals who fled the socialist regime of dictator Nicolas Maduro, Trump then described presumptive Democratic nominee Joe Biden as a “puppet” being used by radical left-wing activists who want to tear down statues of historic figures and who want to impose socialism.

“Now Joe Biden and the radical left are trying to impose the same system — socialism plus — in America,” he said. “Biden is a puppet of Bernie Sanders, AOC, the militant left, people who want to rip down statues and monuments to George Washington, Thomas Jefferson, Benjamin Franklin, Jesus.”

It comes as Trump has sought to draw a contrast between himself and former Vice President Biden and the Democrats on cultural and social questions that have been part of a fiery debate in recent weeks — such as whether to tear down statues of past American leaders, and about defunding police departments.

Trump accused Biden–the presumptive Democratic presidential nominee–of having been part of the Obama administration’s “pro-communist” policies in relation to Cuba’s Castro regime. Trump said that if elected, Biden would leave Americans at the mercy of a “socialist mob” at home.

“Biden wants to defund the police, he wants to call the cops the enemy which he did the other day, leaving every citizen at the mercy of a socialist mob, or a mob far worse than socialism was ever meant to be,” he said.

It comes as numerous polls continue to show Trump down against Biden both nationally and in swing states, having suffered a sharp decline over his handling of the coronavirus crisis that originated in China and hit the U.S. in March — shutting down the economy.

Since then, he has seen numbers drop further amid the protests and riots that broke out in the wake of the death of George Floyd, a Black man who died May 25 while in the custody of Minneapolis police.

But in recent weeks Trump has taken a tough stance on the efforts by left-wing groups to tear down statues and defund police, tapping into a focus on law and order which he used in his 2016 campaign.

Biden has not backed the more radical demands of the left, although he has supported calls for police reforms and this week said that some funding should “absolutely” be directed away from the police. But the Trump campaign has claimed that a Biden administration would give in to the demands of radicals.

Earlier, Trump had taken a tough line on law enforcement after receiving a briefing from U.S. Southern Command on the fight against narcotic smuggling.

“I will not have open borders. We will not abolish the police. And we will not slash the budgets for our military,” he said.

Trump was due to attend a fundraising event later in the day before moving to New Hampshire for a political rally — but the campaign announced that the event would be canceled due to an impending tropical storm.