At least two Democratic Party governors said Thursday they’ll delay reopening schools for the fall semester if they decide the coronavirus pandemic makes reopening them unsafe for students and staff.

The statements by Gov. Jay Inslee of Washington and Gov. Gretchen Whitmer of Michigan came two days after President Trump said his administration would “very much put pressure” on governors to reopen schools in the fall.

But Inslee and Whitmer both said Thursday that virus data – not presidential pressure – would determine their decisions, which they said remained the prerogative of the states, not the White House.

“Decisions about school and how to have it, onsite or otherwise, will remain with the state of Washington,” Inslee told reporters at a news conference, according to The Associated Press. “These are Washington students and Washington state has the legal authority to make decisions about their education.”

Inslee referred to Trump’s comments about pressuring governors as “hogwash,” according to the AP. 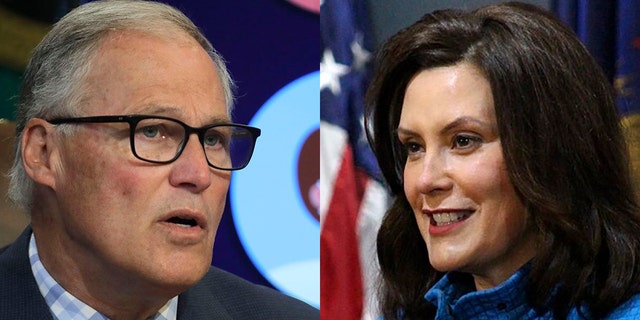 Governors Jay Inslee, left, of Washington and Gretchen Whitmer of Michigan, both Democrats, asserted Thursday that they — not President Trump — will determine when their states’ schools will reopen.

Whitmer also defended what she claimed was her right to make the call for Michigan.

“I want to make this clear,” Whitmer wrote in a Twitter message. “I will not send our kids and our education workforce into our schools unless it is safe to do so, plain and simple. I have made decisions based on science and facts to keep Michiganders safe since the beginning, and won’t stop now.”

Both Democrats have a history of pushing back against the president.

In April, Inslee accused Trump of “fomenting domestic rebellion” after the president expressed support for demonstrators who opposed what they viewed as overreaching stay-at-home orders from governors.

Inslee took issue with a series of “LIBERATE” tweets by the president, referring to them as “unhinged rantings.”

In March, Trump claimed Whitmer was in “way over her head” regarding the coronavirus outbreak and didn’t “have a clue” how to handle the crisis.

Whitmer responded by claiming the federal government was stalling on addressing Michigan’s requests for equipment and guidance in addressing the outbreak.

Why Hollywood needs computer games tech more than ever

Concealed carry permits rise despite clampdown from some states,…