The cast of “Smash” is returning to the screen for a good cause.

Actors including Katharine McPhee, Debra Messing and Megan Hilty will reunite May 20 to present a stream of the one-night-only 2015 Broadway concert of the musical “Bombshell” within the TV show. It will be seen on People.com, PeopleTV and the magazine’s Facebook page and Twitter, and all proceeds will go to coronavirus relief.

“I do remember how exciting it was that night,” said McPhee, who went on to star in “Waitress” on Broadway. “I have great memories of just being so elated to be there.”

The evening will be introduced by two-time Academy Award-winner Renée Zellweger and will involve memories, stories and comments from the original cast. 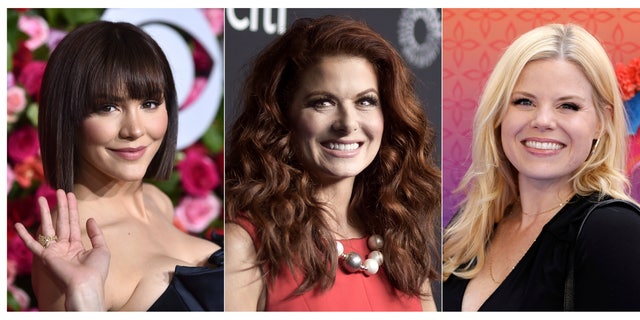 (From left) Katharine McPhee, Debra Messing, and Megan Hilty will reunite May 20 to present a stream of the one-night-only 2015 Broadway concert of the musical within the TV show ‘Smash.’ (AP Photo )

“It’s really just an insight for all the people who love the show and gives them a chance to kind of relive it with us and hear stories that perhaps they never knew,” said McPhee, who was working on the Netflix comedy “Country Comfort” when the pandemic hit.

In the series, Hilty and McPhee played feuding actresses hoping to play Marilyn Monroe on Broadway. Messing and Borle were the book-and-song writing team, Davenport was the quick-to-scream director, and Huston was the feisty lead producer. Original songs were written by the songwriting team of Marc Shaiman and Scott Wittman.

“Smash” ended its TV run in 2013 and the cast reunited for a one-night-only “Bombshell in Concert” at the Minskoff Theater in front of 1,600 people two years later, which became one of the most successful fundraisers ever for The Actors Fund. The stream of that concert also will encourage viewers to donate to the organization.

In the past seven weeks, the Fund has distributed more than $10.1 million in emergency financial assistance — more than five times it normally provides in a year.

“I think people are going to be really excited when they realize that it’s going to be open to everybody who ever wanted to see it,” said McPhee. “It just felt so exciting to be reliving something that we all loved and cherished so much.”

“Smash,” with first-rate songs and a studded cast, is looked back on fondly by many Broadway fans. “I think it was a little ahead of its time,” McPhee said. “It was just something that was so different.”

America Ferrera ‘didn’t get to really enjoy’ her 2007 Emmy win: ‘No one in the room thought I deserved it’

Darius Rucker, wife Beth splitting after 20 years of marriage: ‘We have so much…

Trump blasts statue removals: ‘If you give power to people that topple…