Texas Gov. Greg Abbott paid his respects along with hundreds of people mourning the death of George Floyd at a church in Houston, where Floyd grew up.

The Republican governor was among the first to view the gold-colored casket, and he wore a striped gold-and-crimson tie, the colors of Floyd’s Houston high school, where Floyd was a standout football player.

He looked at Floyd’s body in the casket at The Fountain of Praise church Monday for about 15 seconds, then lowered his head with his hands folded for several seconds more.

Floyd’s funeral will be Tuesday, followed by burial at the Houston Memorial Gardens cemetery in suburban Pearland, where he will be laid to rest next to his mother, Larcenia Floyd.

Abbott told reporters outside the church that he will include Floyd’s family in discussions about police reform and any related legislation.

“George Floyd is going to change the arc of the future of the United States. George Floyd has not died in vain. His life will be a living legacy about the way that America and Texas responds to this tragedy,” Abbott said.

Abbott said he planned to meet privately with Floyd’s family and present them with a Texas flag that was flown over the state Capitol in Floyd’s honor. 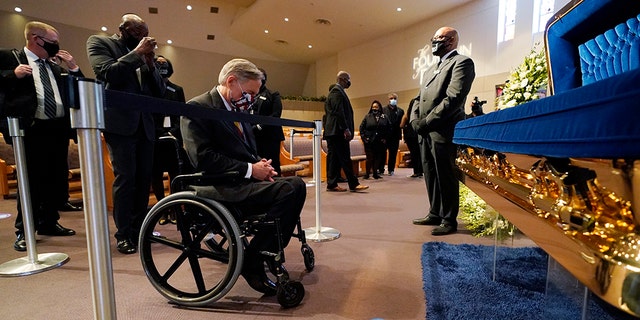 Texas Gov. Greg Abbott passes by the casket of George Floyd during a public visitation for Floyd at the Fountain of Praise church, Monday, June 8, 2020, in Houston. (AP Photo/David J. Phillip, Pool)

Bracy Burnett approached Floyd’s casket wearing a homemade denim face mask scrawled with “8:46″ — the length of time prosecutors say Floyd, who was black, was pinned to the ground under a white officer’s knee before he died.

“All black people are not criminals. All white people are not racists. All cops are not bad. And ignorance comes in all colors. That’s what I thought about when I viewed the body,” Burnett, 66, said.

Floyd’s death has spurred calls for change throughout western society.

In Paris, France’s top security official said police would no longer permit chokeholds that have been blamed for multiple cases of asphyxiation and have come under renewed criticism after Floyd’s death.

The Minneapolis City Council has vowed to dismantle the city’s 800-member police agency. And in Washington, House and Senate Democrats held a moment of silence at the Capitol’s Emancipation Hall before proposing legislative changes in policing oversight, reading Floyd’s name and those of others killed during police interactions and kneeling for 8 minutes and 46 seconds — now a symbol of police brutality.

Besides banning police chokeholds, the Justice in Policing Act would limit legal protections for police and create a national database of excessive-force incidents, according to an early draft.

Donald Trump Jr. says Dems calling for police to be defunded should first call for security details to be cut