Spain started flying flags at half-staff at more than 14,000 public buildings as the country – one of the hardest-hit in the world from the coronavirus – is beginning a 10-day period of mourning.

King Felipe VI marked the occasion Wednesday by leading a minute of silence for Spain’s 27,117 coronavirus victims, the fifth most across the globe. Prime Minister Pedro Sánchez and lawmakers participated from Parliament, while health workers and other citizens also stopped activity to honor the dead.

The dead are “men and women whose lives have been suddenly cut short, leaving friends and family in great pain, both from the sudden loss and from the difficult circumstances in which it has occurred,” government spokeswoman María Jesús Montero said following a recent Cabinet meeting where the grieving period was approved. 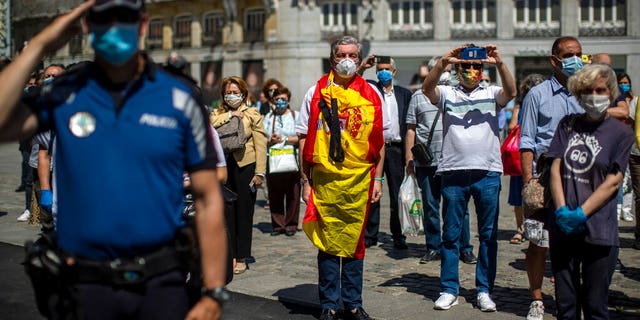 People hold a minute of silence for coronavirus victims at Sol square in downtown Madrid, Spain, on Wednesday. (AP)

No other country so far has announced an observance on the scale of Spain’s 10-day mourning period, an event unprecedented since the country reinstated democratic rule in 1978, according to the Associated Press.

In 1975, when dictator Gen. Francisco Franco died, a 30-day mandatory mourning period was declared. Three days of mourning were observed in March 2004 for nearly 200 victims of Al Qaeda-inspired attacks on Madrid commuter trains.

Montero said 80 percent of Spain’s virus-related deaths were people age 70 or older, “those who helped build our country as we recognize it today, and ultimately laid the foundations of our democracy.” 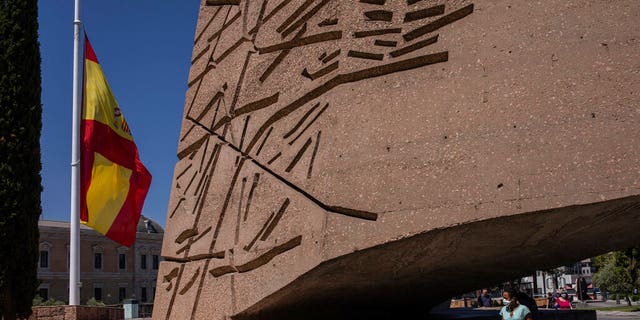 A Spanish flag hoisted to half-staff flutters at Colon square in Madrid on Wednesday. (AP)

“They might not accompany us physically, but they will remain forever in our memory,” she said.

Felipe VI, as Spain’s head of state, is also planning to preside over a solemn ceremony to honor the dead once the country emerges from its lockdown rules.

GOP lawmaker argues left is ‘funding, in a huge way,’…