The U.N. Security Council failed again Friday to extend a cross-border humanitarian aid program in Syria, after Russia and China vetoed a resolution backed by other members to extend the program — while failing to drum up enough support for their own resolution to restrict it.

The cross-border aid program allows aid to be funneled into Syria by keeping open crossings on the borders in the north of the war-torn country. The years-long program was partially extended in January when Russia vetoed a resolution that would see four crossings open, and instead forced the council to pass Resolution 2504, which reduced the border crossings to two and cut the mandate to six months. That mandate expired Friday.

On Friday, Russia and China used their vetoes for the second time in a week to block a U.N. resolution that passed and would have kept open two border crossings in the country’s rebel-held northwest, days after vetoing a similar resolution that had also sought to keep them open, and had initially called for a crossing on the northeast border with Iraq to be re-opened.

That resolution, obtained by The Associated Press, would extend the mandate through the Bab al-Hawa crossing for a year and the mandate for the Bab al-Salam crossing — which Russia wants to eliminate — for three months to wind up its activities.

Meanwhile, a Russian-drafted resolution that would have reduced the number of crossings to just one failed to receive the nine yes votes needed for it to pass. Only four voted in favor, meaning a veto was not required to stop it.

Russia and China have argued that aid should be delivered across conflict lines, and rejected the U.S-backed resolution as continuing “reliance on temporary and extraordinary mechanisms. But both U.N. officials and humanitarian groups have warned of a catastrophe if the aid crossings are not extended, particularly given the COVID-19 crisis.

“A failure to extend the cross-border authorization would sever the U.N. operation currently underway,” Undersecretary-General for Humanitarian Affairs Mark Lowcock said last week, warning of families reduced to cooking weeds to survive. “It would end the U.N. food deliveries and the support to nutrition centers.” 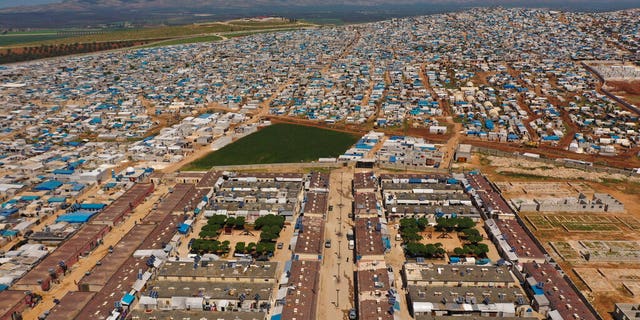 FILE – In this April 19, 2020 photo file photo, shows a large refugee camp on the Syrian side of the border with Turkey, near the town of Atma, in Idlib province, Syria. (AP Photo/Ghaith Alsayed, File)

“It would cause suffering and death.”

U.S. Ambassador Kelly Craft, who has spoken out strongly in favor of extending and expanding the number of crossings, referred to her visit to the Syrian refugee camps in March and said she would not let those people down.

“There is still a chance for us to fix this. We still have time to do the right thing as a Council, and I will work tirelessly until the Syrian people can get the aid and assistance they need to survive,” she said

In a statement rejecting the Russian draft, Craft said it “did not come close to meeting the humanitarian needs of the Syrian people.”

“It is riddled with false and misleading language related to sanctions targeted at the Assad regime – clearly designed to obfuscate blame for the humanitarian catastrophe caused by Assad in Syria,” she said. “It moreover attempts to propagate the well-established lie that cross-line assistance is improving despite multiple reports from the Secretary-General stating the opposite, and it removes any mention of the Security Council-supported political process.”

The Associated Press reported that negotiations were ongoing and that a new draft could be considered at a meeting on Saturday.

Meanwhile, a coalition of Syrian American groups called for aid to continue to be delivered via humanitarian groups working on the ground.

“As members of the United Nations Security Council, Russian and China have proven incapable of putting politics aside for the best interests of humanitarian principles,” a statement from the groups said. “The international community should develop a system of cross-border humanitarian aid delivery to populations in northern Syria without the consent of Assad and its backer, Russia. “