RNC claims gunshot fired into GOP field office, but police say damage ‘not believed to be caused by firearm’

EXCLUSIVE: The Republican National Committee told Fox News they believe a gunshot was fired through a window of a GOP office in Mohave County, Arizona during a Trump Victory event Thursday night, but local police say they don’t believe the shattered glass was caused by a firearm.

An RNC official told Fox News that at around 7:00 p.m., a group of five GOP volunteers were gathered in the Mohave County Republican Office in BullHead City, Ariz., to host an online “MAGA Meet Up” — an online tool the campaign uses to talk with supporters– when a gunshot shattered a window near the front door.

The official described the door as being in “extremely close proximity” to where those volunteers were sitting.

The official told Fox News that no one was hurt. The official, who called it a “scary situation,” said police are still investigating the individual and their motivation.

But a Bullhead City Police spokesperson told Fox News Friday that they are investigating an aggravated assault and criminal damage incident at the Mohave County Republican Central Committee. But the spokesman said police, at this time, do not believe the shattered window was caused by a firearm.

“On Thursday, May 28, at about 7:20 p.m., police were called for a report of a weapons offense,” the spokesperson told Fox News. “The investigation revealed that an unknown object penetrated through the window and blinds. At this time, police do not know what caused the damage to the glass window; however, it is NOT believed to be caused by a firearm.”

“Six people were inside the building at the time. No one was injured. There are no suspects identified. No one was seen in the area or fleeing,” the spokesperson continued. “The case is still under investigation.” 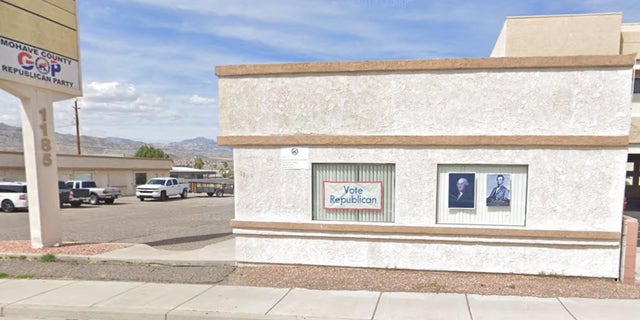 However, eyewitnesses who gave statements to the police described the incident as “extremely loud and quick” and said it “seemed like a gunshot, based on their experience with weaponry,” an RNC official told Fox News, noting that several of the eyewitnesses are military veterans.

The RNC official told Fox News that they want the police investigation to go forward, but that they have “no reason to doubt” their volunteers or their accounts of the incident on Thursday night.

“Last night, another group of President Donald Trump supporters appeared to be targeted when a gun shot was fired into a clearly-marked local Republican office while they were inside hosting an event,” Trump Victory spokesman Rick Gorka told Fox News. “Thankfully no one was hurt.”

He added: “This pattern of violence against our volunteers is sickening.”

The incident follows other violence against Trump supporters. In February, a New Hampshire man was arrested after allegedly assaulting a 15-year-old Trump supporter and two adults at a polling site during the state’s first-in-the-nation primary.

The man, Patrick Bradley, 34, of Windham, was charged with simple assault and disorderly conduct.

Fox News first reported that the suspect got in the face of the teenage boy who was wearing a red “Make America Great Again” hat and volunteering at the Trump tent at Windham High School, a polling location for the New Hampshire primary.

Also, earlier this year, in a separate incident, a Florida man, Gregory Timm, 27, was accused of ramming his van into a Republican Party voter registration tent.

An arrest report said Timm told deputies he did not like Trump and “someone had to take a stand.”

Pompeo: US imposes 9 more sanctions on exports Iran uses to fund its Revolutionary…