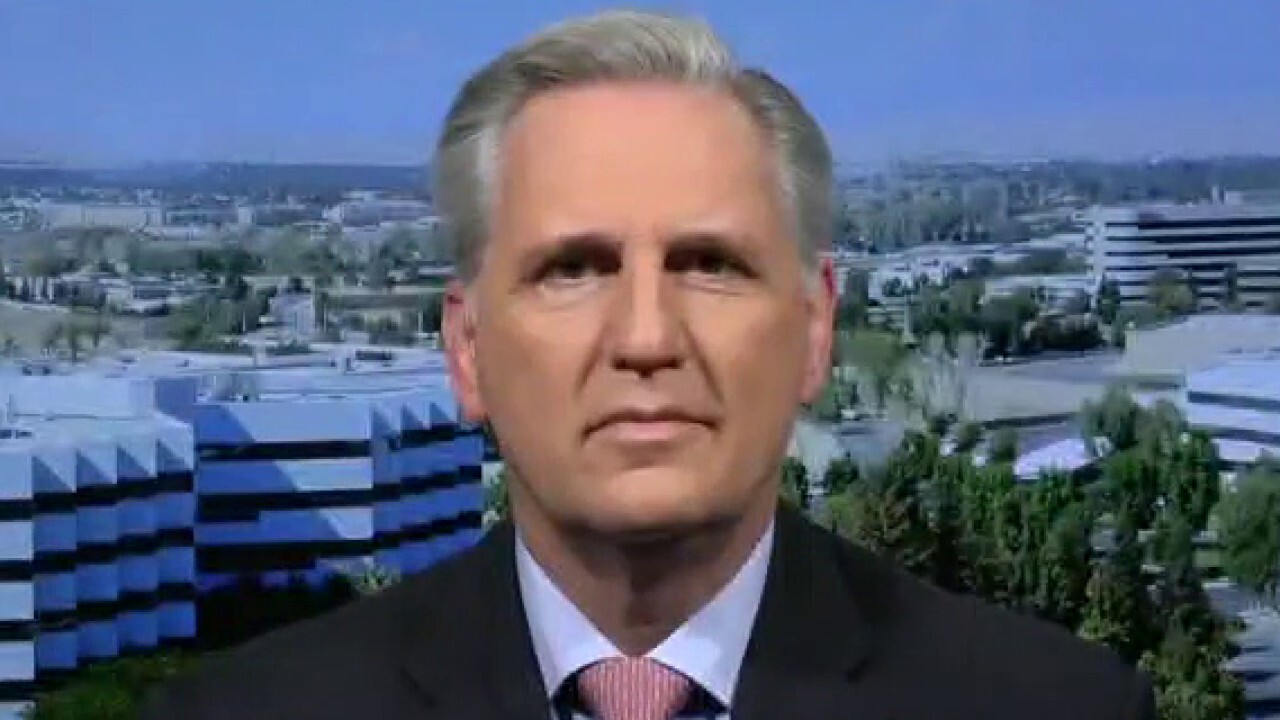 House Minority Leader Rep. Kevin McCarthy, R-Calif., described some of the next steps he believes Congress must take to help Americans deal with and recover from the coronavirus pandemic, in an interview with Fox News’ “Sunday Morning Futures.”

First, however, McCarthy paid tribute to his friend, Rep. John Lewis, D-Ga. Lewis died Friday night at the age of 80 following a battle with pancreatic cancer. Lewis, a civil rights icon, was among the speakers at the march on Washington along with Dr. Martin Luther King Jr., and he was among the peaceful protesters who marched on the Edmund Pettus Bridge in Selma, Ala., in 1965.

“As such a young man he tried to cross a bridge simply to give people the right to vote,” McCarthy said. “He did it in a peaceful manner and he was beaten almost to his death.” McCarthy added that Lewis “did it in a peaceful manner to help change this nation. … he made this nation better and he lived his life in a manner that we can all respect and live up to, and he was kind to all.”

Turning to the next coronavirus relief package being worked on in Congress, McCarthy noted that there remains roughly $1.5 trillion already appropriated by Congress that needs to get into the economy, but he did point out certain key items that he feels must be addressed moving forward.

“We need liability protection because these small businesses are questioning whether they can open again, our schools and others,” he said. So let’s protect those as we move forward.” Liability protection for businesses is among the issues that President Trump has called on to be included in new legislation.

McCarthy also noted that Congress erred by going too far in past legislation when it comes to unemployment insurance, because some people are now making more from unemployment than they did at their jobs. As a result, they are hesitant to return to the workforce.

“Let’s also look at any time you’re using federal money, it shoudn’t deincentivize the ability to work,” McCarthy said. “We made a mistake where we overpaid on unemployment insurance where now it’s hard for people to come back to work because they’re making more on unemployment than they can working. So we got to straighten that out as we move forward.”

The Republican leader also pointed to a need to prioritize the safety of children in day care, as well as both students and teachers in schools. He stressed the importance of sending kids back to school, but that it must be done responsibly.

MCCARTHY WARNS IF GOP DOESN’T WIN IN NOVEMBER, DEMOCRATS ‘WILL CHANGE THE RULES OF THE GAME’

“When you look at these recent studies, you’re finding that children have not kept their reading, their writing, and their math, losing more than 30 percent of it. We cannot have a whole generation that’s uneducated,” he warned. “So what we need to do is actually put that plan together, ‘cause we’ve got to make sure schools can reopen.”

McCarthy noted two cities from his home state, Los Angeles and San Diego, have said they do not intend to reopen schools at all this year, and that this may be a premature decision given the progress that has been made in COVID-19 vaccine development.

“Remember what is happening here with warp speed,” McCarthy said, referring to the White House’s plan to speed up vaccine development. “We’ve got five companies that are in BARDA that have real promise of having a vaccine, could even be this year. Or the therapies that are coming forward. Tomorrow is going to be better than today based on what this administration has been doing,” he said.

McCarthy said that the U.S. should also learn from this experience, especially when it comes to reliance on China.

“If we learn nothing from this, not the lies of China but bringing those jobs back to America but also our supply chain itself,” he said. “Not being beholden to China for so much of our critical minerals and others, let’s find a way that we improve it here and for our stockpiling. I would do that in a different manner, working with the private sector to stockpile it.”

The minority leader then called out Democrats for how they have responded to recent unrest in cities like Portland, where protests following George Floyd’s death have continued.

“Watch what Nancy Pelosi just said the other day. She thinks what’s happening in Portland is a graffiti problem. No, it’s a mob problem that is overrunning. You have people across this nation who are scared to death. You have young children being murdered,” he said.

McCarthy also referenced pushes for various monuments to be removed, from those honoring Confederate figures to those memorializing America’s Founding Fathers such as George Washington and Thomas Jefferson, who were slave owners. He said that he is pushing for legislation that would punish cities that do not do enough to protect monuments.

“Our bill will withhold federal grants for cities that do not uphold and protect the statues. Because the cities have the responsibility for law and order, not to leave these precincts, not to allow these mobs to rule our communities,” he said. “We have to stand up to this.”

Sen. John Kennedy bashes Pelosi for ‘getting her hair…