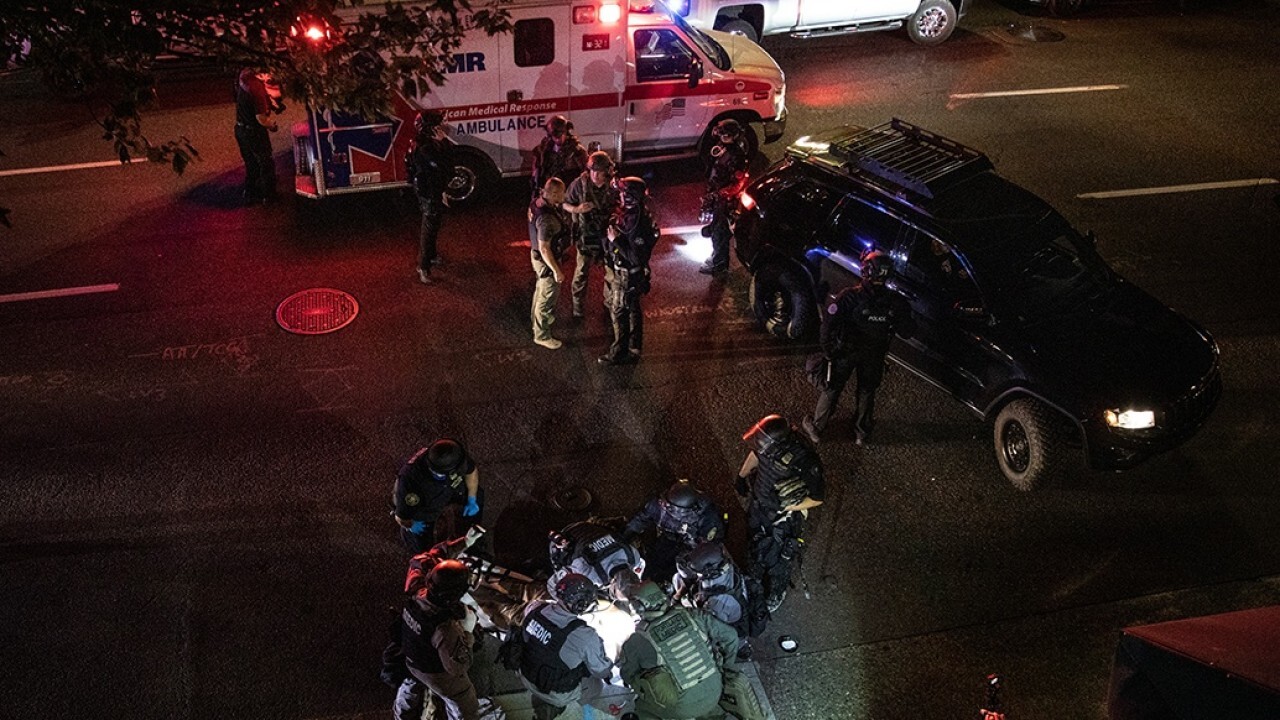 A number of progressive groups in Portland, Ore., are demanding the resignations of Mayor Ted Wheeler and police Chief Chuck Lovell after the deadly shooting that occurred in the city over the weekend as skirmishes broke out between supporters of President Trump and Black Lives Matter protesters.

The Oregon chapter of the Council on American-Islamic Relations, the Oregon Justice Resource Center, the Portland Democratic Socialists of America NextUp Action Fund, Portland’s Resistance and Popular Mobilization PDX have all called for Wheeler’s resignation in a joint letter that said the mayor has “not protected or supported” the city’s residents.

“What took place last night was inevitable given Mayor Wheeler’s repeated failure,” the letter said, according to the Oregonian. “He has not protected or supported Portlanders. We do not have confidence in his ability to course-correct. He must resign.”

PORTLAND MAYOR SENDS OPEN LETTER TO TRUMP: ‘NO THANKS’

Bobbin Singh, the executive director of the Oregon Justice Resource Center, also called for the local leaders to resign.

“These conditions have been created because there’s been a lack of leadership, a lack of vision,” Singh said. “We can no longer move forward with the current leadership that’s in place in Portland.”

The victim of Saturday’s shooting was identified by Joey Gibson, founder of the right-wing group Patriot Prayer, as Aaron “Jay” Danielson of Portland. Photos taken of the body show he was wearing a Patriot Prayer hat.

The Oregonian cited sources in reporting that the Portland Police Bureau is investigating Michael Forest Reinoehl, 48, for his alleged involvement in the fatal shooting.

Both Wheeler and Lovell have been under intense scrutiny from both sides of the political divide, with Trump calling Wheeler, a Democrat, a “fool” and blamed him for allowing violence to proliferate in the liberal city.

Wheeler, who hit back at the president during a news conference.

“That’s classic Trump. Mr. President, how can you think that a comment like that, if you’re watching this, is in any way helpful?” Wheeler said.  “It’s an aggressive stance; it is not collaborative. I certainly reached out, I believe in a collaborative manner, by saying earlier that you need to do your part and I need to do my part and then we both need to be held accountable,”

He said he wanted to work with the president.

“Wouldn’t that be a message?” the manyor said. “Donald Trump and Ted Wheeler working together to help move this country forward. Why don’t we try that for a change?”

The unrest began on Saturday when a caravan of about 600 vehicles packed with Trump supporters drove through Portland and was met with counterprotesters. Skirmishes broke out between the groups and, about 15 minutes after the caravan left the city, Danielson was shot.

GOP lawmaker argues left is ‘funding, in a huge way,’ protests and riots across US

McConnell raises more than $1M since polls closed in KY, as Dems battle over who…