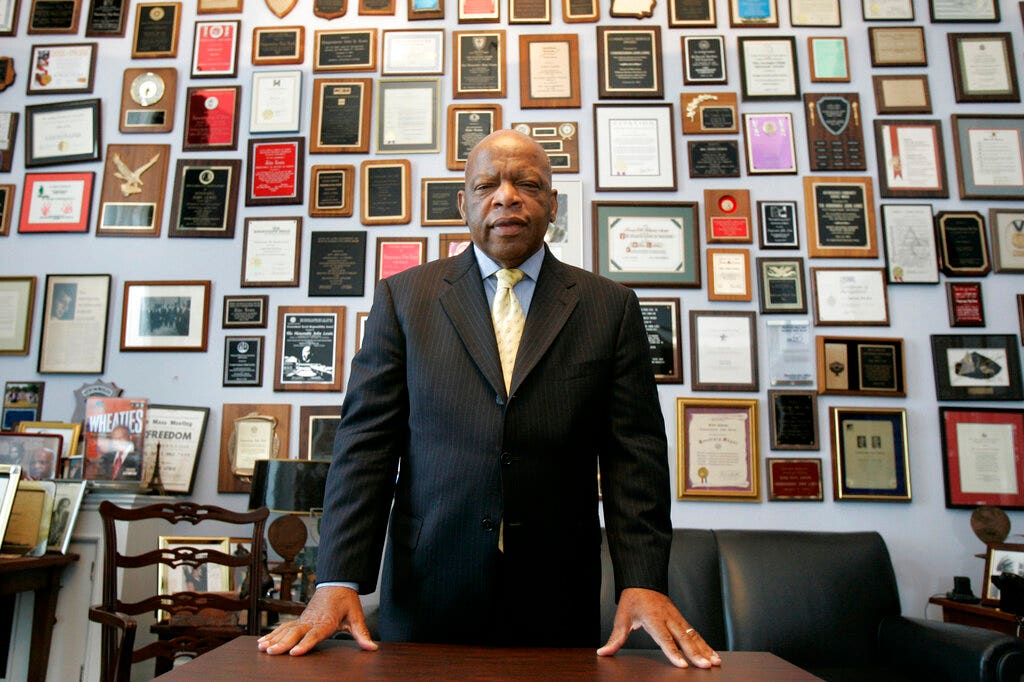 After staying silent Saturday morning as other tributes came pouring in, President Trump tweeted condolences for the late Rep. John Lewis in the afternoon and called him a “civil rights hero.”

“Saddened to hear the news of civil rights hero John Lewis passing. Melania and I send our prayers to he and his family,” Trump tweeted shortly after 2 p.m. after he left Trump National Golf Club in Virginia.

Lewis, D-Ga., died Friday night after a battle with pancreatic cancer. He was 80.

TRUMP, PELOSI ORDER FLAGS AT HALF-STAFF TO HONOR JOHN LEWIS; POSSIBLE HE COULD LIE IN STATE

The former chairman of the Student Nonviolent Coordinating Committee (SNCC) and one of the keynote speakers at the historic March on Washington before the Rev. Martin Luther King Jr., Lewis spent his life advocating for the rights of minorities. Lewis served in Congress for 33 years.

But Lewis was no fan of Trump. He sparked a boycott of his inauguration in 2017 and said the president-elect was not a “legitimate president.” Lewis said Russians destroyed the candidacy of Hillary Clinton and helped Trump win the election.

Trump hit back at Lewis saying in January 2017 that he was “all talk” and “no action,” and tweeting that “Lewis should spend more time on fixing and helping his district, which is in horrible shape and falling apart.”

Lewis continued to speak out against Trump throughout his presidency and delivered an emotional speech on the House floor backing Trump’s impeachment inquiry, citing a “moral obligation.”

“Our nation is founded on the principle that we do not have kings,” Lewis said in the December 2019 speech. “We have presidents. And the constitution is our compass. When you see something that is not right, not just, not fair, you have a moral obligation to say something. To do something. Our children and their children will ask us, ‘What did you do? What did you say?’ For some, this vote may be hard. But we have a mission and a mandate to be on the right side of history.”

“[P]lease say nothing,” Bass, the head of the Congressional Black Caucus, tweeted. “… Please let us mourn in peace.”

Trump had already issued a White House proclamation shortly after 11 a.m. to lower American flags to half-staff nationwide “as a mark of respect for the memory and longstanding public service” of Lewis. And both White House Press Secretary Kayleigh McEnany and Vice President Mike Pence issued statements of condolences and tributes.

While Trump’s brief statement was less effusive that other presidents and members of his Administration, Trump made no mention of the controversy he once had with Lewis.

Tributes for Lewis came in earlier Saturday from former presidents Jimmy Carter, George W. Bush, Bill Clinton and Barack Obama, as well as lawmakers from both parties, who praised Lewis for his lifelong dedication to finding liberty and justice for all.

Bush recalled Lewis’s marching for equality in Selma, Ala. where he “answered brutal violence with courageous hope.” Carter said Lewis “made an indelible mark on history through his quest to make our nation more just.”

Bill and Hillary Clinton called Lewis the “conscience of the nation” and said they were grateful their friend “lived to see a new generation of Americans take to the streets in search of his long-sought ‘beloved community.”

Obama, who awarded Lewis the Presidential Medal of Freedom in 2011 for his courage and unwavering commitment to justice, said Lewis “loved this country so much that he risked his life and his blood so that it might live up to its promise.”

Pence praised Lewis as a “good and great man” whose decades of public service changed America.

“John Lewis will be remembered as a giant of the civil rights movement whose selflessness and conviction rendered our nation into a more perfect union and his example will inspire generations of Americans,” Pence said in a statement.

“While John Lewis will be rightly remembered as an icon of the civil rights movement, for me, he was also a colleague and a friend,” Pence added. “Even when we differed, John was always unfailingly kind and my family and I will never forget the privilege of crossing the Edmund Pettus Bridge at his side on the 45th anniversary of Bloody Sunday.”