Poland’s conservative president, Andrzej Duda, was the frontrunner in Sunday’s election, but fell short of the 50 percent of votes needed to win in the first round, according to the projection of an exit poll.

The results, if confirmed, pave the way for what is building into a very tight race in July 12 runoff that will most likely pit the populist incumbent against the centrist Warsaw mayor, Rafal Trzaskowski, who was in second place.

Whether Duda ultimately wins a second five-year term in two weeks’ time will determine whether the ruling nationalist party that backs him, Law and Justice, keeps its near-monopoly on political power in Poland.

The party has been in conflict with the European Union over laws that have given it control over top courts and key judicial bodies, something the 27-nation bloc has denounced as an erosion of democratic European values. 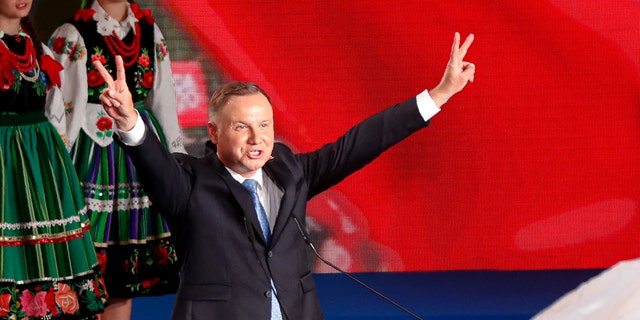 Since the Polish president has the power to veto laws, Duda winning a second term is crucial to the party as it seeks to continue to reshape the nation’s laws in line with its conservative worldview. The pro-EU Trzaskowski has vowed to block any new laws that violate constitutional norms.

In a speech to cheering supporters late Sunday in the town of Lowicz, west of Warsaw, Duda noted that his result was better than in the first round five years ago.

“I have this result after five years of being in politics, of being criticized in many ways, attacked, of taking difficult decisions,” Duda said. “After these five years many more people voted for me.”

According to the projection by the Ipsos polling firm, Duda won 41.8 percent and Trzaskowski 30.4 percent in Sunday’s vote. The poll has a margin of error of plus or minus 2 percentage points.

Poland’s state electoral commission has said it would release the final official results by Wednesday evening.

The candidate with the third most votes according to the exit poll was Szymon Holownia, a TV personality and journalist who had once studied to be a priest. He was projected by the Ipsos poll to have 13.3 percent. Holownia is unaffiliated with any party and generated enthusiasm among some Poles tired of years of bickering between Law and Justice and Civic Platform, the country’s two main parties.

A far-right nationalist candidate, Krzysztof Bosak, was projected by the exit poll to win 7.4 percent of the vote, and his voters would also be up for grabs in the runoff.

In his speech to supporters late Sunday, Duda lost no time in reaching out to supporters of other candidates, saying he shares some views with those on the left, but making particular mention of Bosak.

Duda said there is “very little that separates” him from Bosak and that “we are of a similar mind on very many issues.”

Trzaskowski told his supporters that it was good news the majority opposed Duda. 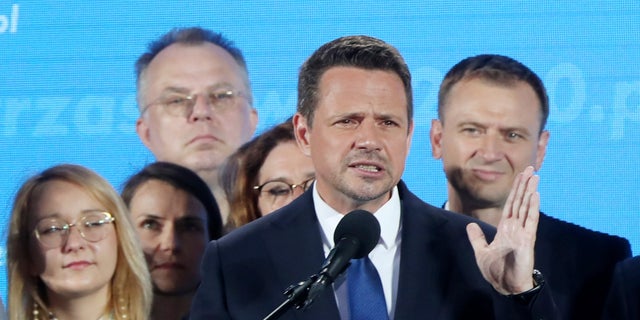 “I want to say clearly to all these citizens – I will be your candidate. I will be the candidate of change,” he said.

A left-wing politician who was Poland’s first openly gay presidential candidate, Robert Biedron, was projected to win 2.9 percent, while an agrarian candidate, Wladyslaw Kosiak-Kamysz had 2.6 percent in the exit poll. All other candidates in a field of 11 polled even lower.

The vote had been scheduled for May 10 but was postponed in a chaotic political and legal battle as the ruling party pressed to hold it despite the pandemic.

In April, Duda had very high support and was expected then to win in a single round. He was helped by adulatory coverage in state media and the inability of other candidates to campaign.

But as restrictions eased, Trzaskowski replaced an earlier candidate fielded by his Civic Platform party who had dismal poll numbers, adding a new dynamic and suspense into the race.

Poland hasn’t been as badly hit by the pandemic as many countries in Western Europe, and most people voted in person, wearing masks and observing other hygiene rules. There was also a mail-in voting option, and thousands of voters in some southwestern regions with higher virus infection numbers were required to vote by mail.

Duda’s campaign focused on defending traditional values in the mostly Catholic nation while promising to keep raising living standards to Western European levels. He took a position against same-sex marriage and adoption and denounced the LGBT rights movement  as a dangerous “ideology.”

That kind of rhetoric — along with the judicial overhaul and the party’s harnessing of public media to promote the government’s image — have raised concerns among some that Poland is following Hungary in eroding democratic norms established after communism collapsed three decades ago.

On the campaign trail, Trzaskowski promised to keep the ruling party’s popular social welfare spending programs while vowing to restore constitutional norms and Poland’s relationship with the EU.