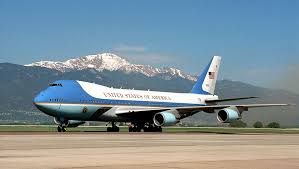 The Air Force is investigating whether a small drone flew close to Air Force One on Sunday before it landed safely at Joint Base Andrews near Washington, D.C.

The White House referred queries to the Pentagon, which confirmed that the incident, which was described by reporters aboard the plane as Mr. Trump was returning from his golf resort in Bedminster, N.J. Sunday evening, was being examined.

Agence France-Presse’s Sebastian Smith tweeted that shortly before landing, Air Force One flew “right over a small object, remarkably close to the president’s plane. Resembled a drone though I’m no expert.” Bloomberg’s Jennifer Jacobs tweeted that multiple people aboard the plane saw “what appeared to be a drone just below the plane.”

Atlanta mayor calls for citizens to stop ‘shooting each…