University of Michigan professor Justin Wolfers and dozens of other academics are leading a massive effort to have an senior faculty member at the University of Chicago removed from his position at the world’s preeminent economics journal — all because he criticized Black Lives Matter’s push to defund police departments.

The attack on a leading academic at the University of Chicago, traditionally a bastion of free speech and no-nonsense conservative economic theory, comes as swarms of left-wing activists have successfully secured numerous firings across the country for viewpoints they deem politically unacceptable. In one extraordinary case this week, an LA Galaxy soccer player was summarily fired because of his wife’s posts on Black Lives Matter.

In a petition addressed to the management of the Journal of Political Economy, the professors accuse senior editor Harald Uhlig of “trivializing the Black Lives Matter (BLM) movement” and “hurting and marginalizing people of color and their allies in the economics profession.”

The petition goes on to falsely accuse Uhlig, the Bruce Allen and Barbara Ritzenthaler Professor in Economics at the University of Chicago, of “drawing parallels between the BLM movement and the Ku Klux Klan.”

The New York Times’ Paul Krugman, an anti-Trump columnist who famously declared that the Internet would prove less important than fax machines, joined in on the attack, writing: “Editor of the Journal of Political Economy, a powerful gatekeeper in the profession. And yet another privileged white man who evidently can’t control his urge to belittle the concerns of those less fortunate.”

Wolfers did not respond when asked by Fox News whether he would seek Ginsburg’s ouster from the Supreme Court. According to his biography page at the University of Michigan, Wolfers serves as a member of the ostensibly nonpartisan Congressional Budget Office Panel of Economic Advisers. 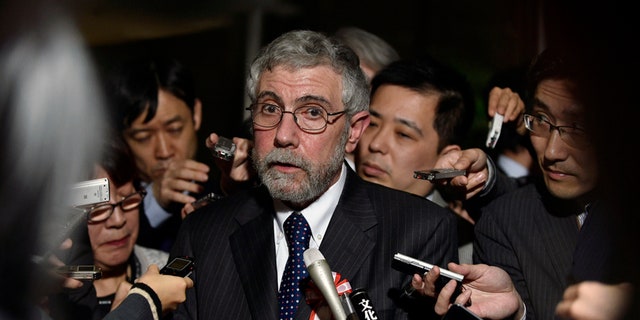 Paul Krugman, who predicted the Internet would never catch on, called for a leading professor to step down for criticizing Black Lives Matter. (REUTERS/Franck Robichon)

“So revealing how eagerly these fanatics support purging and firing wrong thinkers,” wrote commentator Andrew Sullivan, responding to one of the faculty members calling for Uhlig to step down. “It’s their first instinct: punish. They disgust me.”

Christopher Brunet, an economist and freelance coder, told Fox News: “There are a million screeching Berkeley PhDs on Twitter, but the silent majority of economics professors aren’t on Twitter — they are buttoned up, and they overwhelmingly support Harald and freedom of speech.”

The drama began when Uhlig wrote on Twitter Monday night: “Too bad, but #blacklivesmatter  per its core organization @Blklivesmatter  just torpedoed itself, with its full-fledged support of #defundthepolice.”

EXCLUSIVE VIDEO: TOP DEM ADMITS THEY PREFER TO KEEP BIDEN ‘IN THE BASEMENT’

Uhlig continued: “Suuuure. They knew this is non-starter, and tried a sensible Orwell 1984 of saying oh, it just means funding schools (who isn’t in favor of that?!?).But no, the so-called ‘activists’ did not want that. Back to truly ‘defunding’ thus, according to their website. Sigh. #GeorgeFloyd and his family really didn’t deserve being taken advantage of by flat-earthers and creationists. Oh well. Time for sensible adults to enter back into the room and have serious, earnest, respectful conversations about it all: e.g. policy reform proposals by @TheDemocrat  and national healing.”

Uhlig’s posts came as the movement to defund the police gained traction this week, even though polls show Americans overwhelmingly disapprove of the idea. On Monday, Minneapolis City Council President Lisa Bender told CNN that people worried about having no one to call during a home invasion were speaking from a “place of privilege.” Those comments drew widespread backlash.

“Look: I understand, that some out there still wish to go and protest and say #defundpolice and all kinds of stuff, while you are still young and responsibility does not matter,” he said. “Enjoy! Express yourself! Just don’t break anything, ok? And be back by 8 pm.”

Separately, in 2017, Uhlig wrote a blog post that asked: “Would you defend football players waving the confederate flag and dressing in Ku Klux Klan garb during the playing of the national anthem?”

The post did not draw an equivalency between Black Lives Matter protesters to the KKK; instead, Uhlig took pains to mention that he was arguing only that President Trump, by criticizing players who kneel during the national anthem, was not impinging on constitutional rights.

“There are a million screeching Berkeley PhDs on Twitter, but the silent majority of economics professors aren’t on Twitter  … [T]hey overwhelmingly support Harald and freedom of speech.”

On Tuesday, Uhlig’s comments were deemed problematic — and worse.

“Racists shouldn’t be allowed to gatekeep our profession,” charged University of Victoria economist Rob Gillezeau. (Even Wolfers had stopped short of calling Uhlig a racist.)

Amid outcry from faculty members are left-leaning institutions, Uhlig offered something of an apology — but it wasn’t good enough for Wolfers, who called it “a– covering.”

“I’m no fan of twitter pile-ons, or call-out culture,” Wolfers said, despite available evidence. “A single tweet won’t get me upset. But reading through @haralduhlig ‘s public writing reveals a pattern that’s a bit too revealing. I don’t think it’s just or fair that Uhlig, as an editor at the @JPolEcon  is an important gatekeeper for economists trying to make their mark. I don’t think the profession’s resolve to look more deeply into racial justice will get a fair hearing under his editorship.”

Jennifer Doleac, an economics professor at Texas A&M University, gleefully tweeted that she hopes Uhlig won’t have his job for “much longer.”

Doleac didn’t respond to a request for comment concerning whether she typically threatens students and colleagues with professional consequences for disagreeing with her. However, she tweeted: “I just got an email from Fox News asking why I am trying to hurt this man’s career. Folks, I don’t have the power to fire him. I do hope he resigns, because he has lost my confidence to be an objective gatekeeper of high-quality research at one of our discipline’s top journals.” 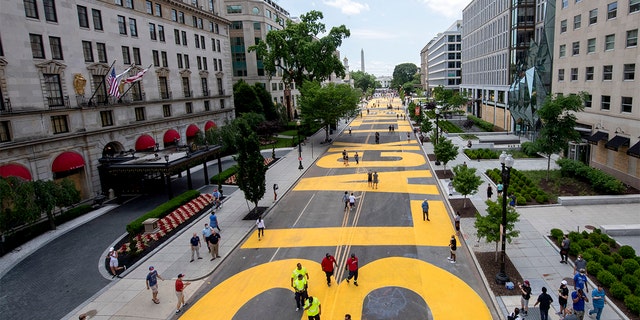 The Washington Monument and the White House are visible behind the words Black Lives Matter sign that has been painted in bright yellow letters on the 16th Street by city workers and activists, Friday, June 5, 2020, in Washington. (Khalid Naji-Allah/Executive Office of the Mayor via AP)

The petition to secure Ulrig’s removal is slated to be delivered to the journal’s management on Wednesday.

Unrestrained outrage in the midst of the in-custody death of George Floyd was apparent in other spheres late Tuesday, as the long-running show “Cops” was abruptly canceled, and HBO Max announced it had pulled the Oscar-winning Civil War epic “Gone With the Wind.”

ScreenRant and The Wall Street Journal were the first to report that the newly-launched streaming service yanked the 1939 film, which takes place at an Atlanta plantation. Critics in the modern era have criticized “Gone With the Wind” for its depiction of black people.

The film won eight Oscars including Best Picture and made history when Hattie McDaniel became the first black American to win an Oscar for her performance.

“As @JerryDunleavy noted, Hattie McDaniel was the first African American to win an Academy Award for her performance in Gone With the Wind,” observed commentator Stephen Miller. “The woke race mafia is **actually** erasing social progress, right in front of us.”

The newsroom at the Times, where Krugman works, also staged an internal revolt because the opinion section published an op-ed by a sitting Republican senator calling for the use of troops to quell widespread rioting in some cities.

The paper initially stood by the opinion piece, but amid a wave of Twitter complaints from the newsroom claiming that the op-ed was literally “violence,” opinion editor James Bennet resigned and top brass apologized.

“The notion that only one viewpoint is acceptable, and no contrary words should be published, even on an opinion page, gets at the heart of why journalism has lost so much credibility,” wrote Howard Kurtz, the host of Fox News’ “MediaBuzz.”

Sean Hannity: With Biden’s pick of Harris the Democratic…