A group of anti-police protesters in Cincinnati set fire to an American flag on Thursday night after the city council cut short the public-input portion of a budget meeting, according to a report.

City Council member David Mann ordered the public-input portion to end after crowd members started jeering and booing a speaker who wanted the city to increase — not decrease — funding for its police department, FOX 19 of Cincinnati reported.

“This went from an emotionally charged evening to close to a mob,” Mann told the station. “We had one speaker who spoke in favor of the police, and he was shouted down. I said, ‘Hey listen folks, we are here to listen to each other,’ and then I was shouted down.”

“This went from an emotionally charged evening to close to a mob.”

Mann later need a police escort to leave the building, the station reported.

Photos posted later on social media showed several people appearing to use cigarette lighters to set Old Glory ablaze as the flag was lying on a sidewalk outside the city’s Duke Energy Convention Center.

Other people, upon seeing the fire, poured water on the flag in an attempt to save it from burning, according to a local journalist.

The flag had been flying outside the convention center then was set on fire around 11 p.m. after the crowd left the meeting around 8:30 p.m., FOX 19 reported.

Some members of the crowd hoisted a “Juneteenth” flag in place of the American flag, while others painted “Defund the police” in the street outside the convention center, the Cincinnati Enquirer reported.

Some painted graffiti on the convention center, including “Blue Lives Murder,” the newspaper reported.

The speaker at the meeting, identified as city resident Carl Beckman, argued that the city police department deserved more funding, amid calls of “Defund the police” that have spread in cities across the U.S. during the recent Black Lives Matter protests following the death of George Floyd in Minneapolis.

Mann said he didn’t appreciate that “Defund the police” supporters didn’t seem willing to listen to other viewpoints. 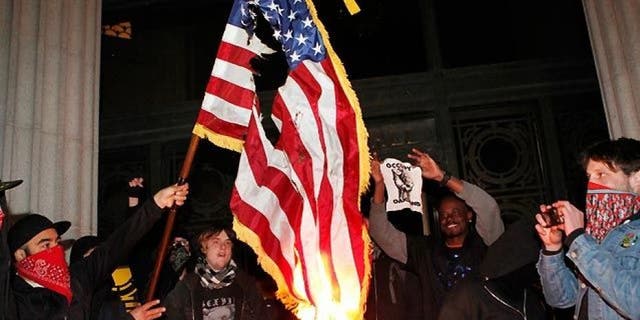 Protesters are seen with a damaged and burning American flag in an undated photo.

“There was a single point of view to be expressed again and again, it was a lot of very vigorous positive response. That’s OK,” he told FOX 19. “But we have to be willing to listen to the other side also.”

Other council members remained after Mann left, and they allowed the crowd to resume speaking after the audience became more orderly, FOX 19 reported.

“We don’t need an official, quote-unquote, meeting to hear the voices of the people of Cincinnati,” council member Jan-Michele Lemon Kearney told the station. “This was a forum for them to speak, and so we stayed to hear them speak.”