Michigan Gov. Whitmer says sports fans ‘not going to be filling stadiums in the fall’

The National Football League is releasing the 2020 season schedule amid the coronavirus pandemic; Fox News sports contributor Jim Gray tells ‘America’s Newsroom’ what we can expect.

Sports fans in Michigan who are expecting a return to normal in the months ahead from a coronavirus shutdown received some disappointing news Tuesday from Gov. Gretchen Whitmer.

“Life’s going to be different,” Whitmer said, referring to the state’s eventual emergence from her virus-response order. “We’re not going to be filling stadiums in the fall.”

That appeared to be bad news for fans of the NFL’s Detroit Lions, as well as college football teams in the state, such as the Michigan Wolverines and Michigan State Spartans.

Whitmer’s remarks came during an interview on Detroit radio station WKQI-FM, according to the Detroit Free Press.

The comments also came less than a week after the NFL released its schedule for the 2020 season, which shows all teams playing a regular slate of four preseason games followed by 16 regular season games stretched over 17 weeks.

But the Lions and other NFL teams are prepared to make adjustments, in case the season needs to be shortened — or the number of fans needs to be limited in order to practice social distancing, the Free Press reported.

“The Detroit Lions are following the NFL’s lead in preparing to play a full 2020 season in front of fans,” the team told the Free Press. “Given the evolving circumstances surrounding COVID-19, contingencies are needed and will be in place. We are evaluating all facets of the game day experience, and will do what is required to maintain a safe and healthy environment at Ford Field where our fans can feel comfortable.” 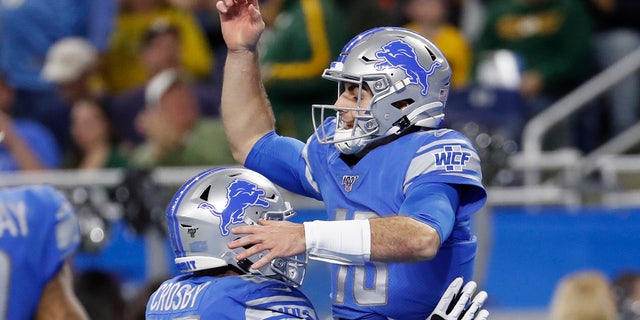 Detroit Lions quarterback David Blough is lifted by teammate offensive tackle Tyrell Crosby (65) after scoring on a 19-yard reception during the first half of an NFL football game against the Green Bay Packers, Sunday, Dec. 29, 2019, in Detroit. (Associated Press)

The league’s Miami Dolphins recently unveiled plans to limit crowds to 15,000 people, if necessary, the report added, noting that Detroit’s Ford Field normally accommodates 65,000 fans while the football stadiums at Michigan and Michigan State have capacities of 107,601 and 75,005, respectively.

The NCAA, meanwhile, announced Friday that no fall sports would be held if students are not permitted to return to campuses.

“That doesn’t mean [schools have] to be up and running in the full normal model,” NCAA President Mark Emmert said, “but you’ve got to treat the health and well-being of the athletes at least as much as the regular students. So, if a school doesn’t reopen, then they’re not going to be playing sports. It’s really that simple.”

Michigan has been among the states hardest-hit by the coronavirus. As of Wednesday morning, Michigan ranked No. 4 in coronavirus deaths, with more than 4.600.

Whitmer recently extended her shutdown order until May 28 but state Republicans are suing the governor, claiming she improperly extended the order without the involvement of the Legislature. Oral arguments in the case are expected to begin Friday, The Detroit News reported.

Bitcoin ‘halving’: What does the much-hyped event mean?

Number of migrants in CBP custody at border plummets amid coronavirus…