The Democratic Senate primary in Georgia was too early to call Wednesday, as Jon Ossoff held onto approximately 49 percent of the vote with more ballots coming in — amid widespread reports of hourslong lines, voting machine malfunctions, provisional ballot shortages and absentee ballots failing to arrive in time.

Ossoff, whose defeat in a 2017 special election was a gut-punch to Democrats who flooded his campaign with money, was leading Sarah Riggs Amico and Teresa Tomlinson. They each have roughly 13 percent of the counted vote, and candidates need 50 percent of the vote to avoid a runoff.

One of the state’s largest counties, De Kalb in the metro Atlanta area, has yet to report any results as of early Wednesday.

As the night wound on, and races were also held in South Carolina, Nevada and West Virginia, it became evident that the long-standing nationwide wrangle over voting rights and election security had come to a head in Georgia — where a messy primary and partisan finger-pointing offered an unsettling preview of a November contest when battleground states could face potentially record turnout.

It raised the specter of a worst-case November scenario: a decisive state, like Florida and its “hanging chads” and “butterfly ballots” in 2000, remaining in dispute long after polls close. Meanwhile, Trump, Biden and their supporters could offer competing claims of victory or question the election’s legitimacy, inflaming an already boiling electorate. 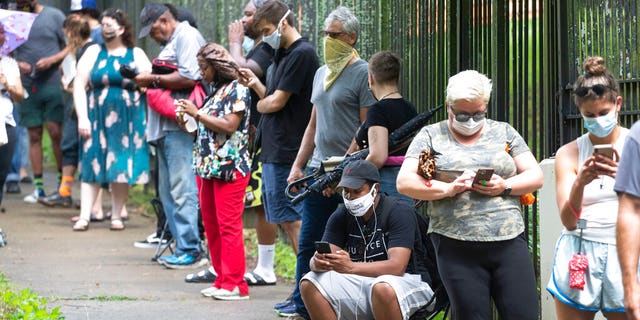 Rachana Desai Martin, a top Biden campaign attorney, called the scenes in Georgia a “threat” to democracy. “We only have a few months left until voters around the nation head to the polls again, and efforts should begin immediately to ensure that every Georgian — and every American — is able to safely exercise their right to vote,” she said.

Atlanta Mayor Keisha Lance Bottoms tweeted at Raffensperger about problems in pockets of metro Atlanta. “Is this happening across the county or just on the south end,” the Democrat asked, referring to an area with a heavily black population.

Stacey Abrams, the 2018 Democratic nominee for governor and an Atlanta resident, tweeted that “Georgians deserve better” and that Raffensperger “owns this disaster.” Abrams established herself as a voting rights advocate after she refused to concede her 2018 race because of voting irregularities when her Republican opponent, now-Gov. Brian Kemp, was secretary of state.

Fulton County, which includes most of Atlanta, has a history of slow vote tabulation. Its local elections chief, Richard Barron, called Tuesday a “learning experience” while alluding to the state’s role in the primary process. 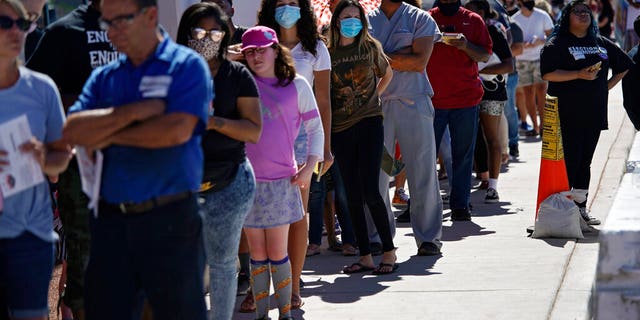 People wait in line at one of a few in person voting places during a nearly all-mail primary election Tuesday, June 9, 2020, in Las Vegas. (AP Photo/John Locher)

The finger-pointing goes beyond details of the law. Raffensperger correctly noted that county officials train poll workers, including on the use of the new voting machines. But Raffensperger is the state’s chief elections official who decides how many machines to send to each county, and his office provides training curriculum for local officials.

On absentee ballots, the Republican secretary of state pushed unprecedented no-fault absentee access, paying to send an application to every Georgian on the active voter rolls. But, as Barron noted, neither the secretary of state nor the legislature provided additional money for local officials to hire staff to process the influx, which dwarfed the typical primary.

WHAT TO KNOW ABOUT THE SHOWDOWN IN GEORGIA

History suggests that both local and state officials, whether in Georgia or elsewhere, could find themselves in the national crosshairs if their election tallies leave the presidency in flux.

“I know that in these hyperpartisan times, half the people will be happy, and the other half will be sad,” Raffensperger said. “But we want to make sure that 100% of people know … the election was done fairly and we got the accurate count.” 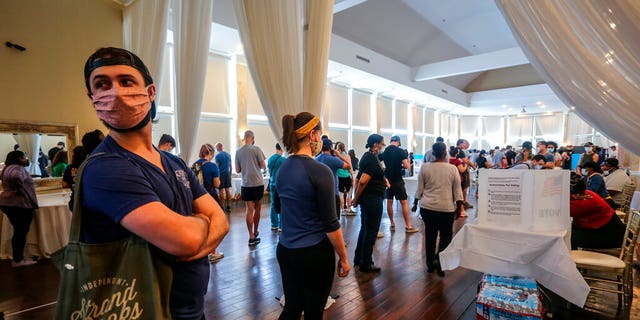 Voters wait in line to cast their ballots in the state’s primary election at a polling place, Tuesday, June 9, 2020, in Atlanta. Some voting machines went dark and voters were left standing in long lines in humid weather as the waiting game played out. (Associated Press)

Paula Jean Swearengin was featured in the 2019 Netflix political documentary “Knock Down the House.” She accepted only individual donations during her campaign and outraised one of her two opponents, former state Sen. Richard Ojeda, by a more than 10-to-1 margin. Also seeking the Democratic nomination was former South Charleston Mayor Richie Robb.

Justice, a billionaire coal and agricultural businessman, defeated Woody Thrasher, Mike Folk and others to win the GOP nomination. This week, President Trump tweeted a message of support for the governor: “Big Jim is doing a tremendous job for West Virginia. Vote for Big Jim!”

Burgum, a former software executive, defeated Michael Coachman in the election, which was conducted exclusively by mail. He’s expected to be a heavy favorite in November over Democratic political newcomer Shelley Lenz, a veterinarian and small-business owner.

In Nevada, voters were waiting in lines for three hours and more Tuesday at limited polling places despite Nevada officials encouraging people to cast their primary election ballots by mail because of the coronavirus pandemic.

Nevada Deputy Secretary of State for Elections Wayne Thorley said his office had received a report of a three-hour wait at one Clark County polling place.

Fox News’ Tyler Olson and The Associated Press contributed to this report.

Bipartisan group of senators introduce bill to rein in Trump’s…