Melania Trump urges end to unrest, calls on country to ‘come together’ in convention address 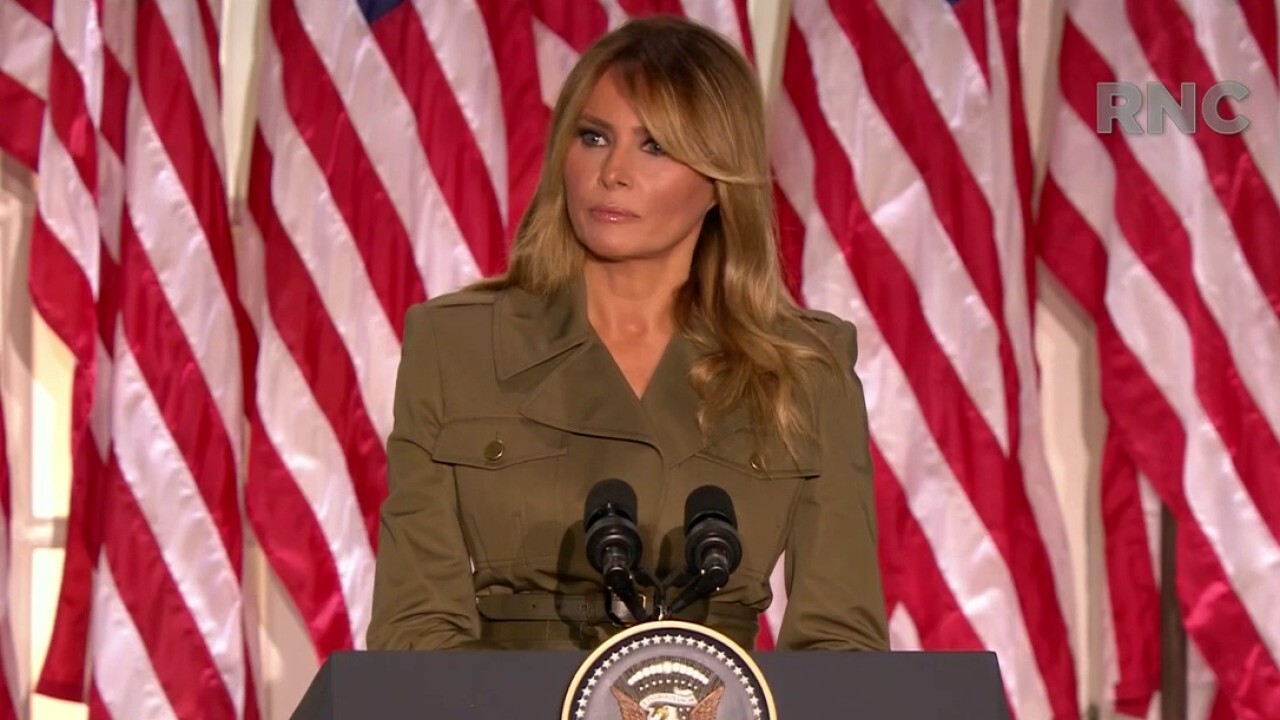 First lady Melania Trump took center stage on the second night of the Republican National Convention, calling on Americans to “stop the violence” amid nationwide protests over racial inequality.

The first lady also expressed her “deepest sympathy” for those suffering or who’ve lost loved ones during the coronavirus pandemic. And she made the case for her husband’s re-election, emphasizing that President Trump “loves this country and he knows how to get things done.”

“Like all of you, I have reflected on the racial unrest in our country. It is a harsh reality that we are not proud of parts of our history,” Trump acknowledged. ”I encourage people to focus on our future while still learning from our past. We must remember that today that we are all one community comprised of many races, religions, and ethnicities.”

And in a tone very different than that of her husband, the first lady called “on the citizens of this country to take a moment, pause, and look at things from all perspectives. I urge people to come together in a civil manner so we can work and live up to standard American ideas. I also ask people to stop the violence and looting being done in the name of justice and never make assumptions based on the color of a person’s skin. Instead of tearing things down, lets reflect on our mistakes.”

Near the top of her speech, the first lady delivered sympathetic remarks to those suffering among the coronavirus pandemic.

“My deepest sympathy goes out to everyone who has lost a loved one and my prayers are with those who are ill or suffering. I know many people are anxious and some feel helpless. I want you to know you’re not alone,” she said.

The first lady also expressd her gratitude and compassion those front-line workers in the battle against the outbreak.

Her sympathetic message came after a more than 2-hour program where there was little mention of the coronavirus, which has taken the lives of nearly 180,000 people across the nation.

In her speech, which was not vetted by the president’s aides ahead of time, the first lady also spotlighted the severity of the crisis.

“I want to acknowledge the fact that since March, our lives have changed drastically,” she acknowledged. “The invisible enemy, COVID-19, swept across our beautiful country and impacted all of us.”

But she also defended the president, who’s performance combating the coronavirus has been heavily criticized by Democratic nominee Joe Biden, the first lady emphasized that “my husband’s administration will not stop fighting until there’s an effective treatment or vaccine available to everyone. Donald will not rest until he has done all he can to take care of everyone impacted by this terrible epidemic.”

The first lady also attempted to put a softer edge on a president know for his blunt and often harsh language.

“We all know Donald Trump makes no secrets of about how he feels about things,” she acknowledged. “Totally honesty is what our citizens deserve from our president. Whether you like it or not,  you always know what he’s thinking.”

But she stressed that “Donald wants to keep your family safe. He wants to help your family succeed. He wants nothing more than for this country to prosper and he doesn’t waste time playing politics.”

And the first lady argued that another 4 years of her husband as president is “what is best for our country.”

The Slovenian-born former fashion model and businesswoman who became a U.S. citizen in 2006 highlighted her personal story.

The first first lady who’s native language isn’t English spotlighted that becoming an American ”is still one of the proudest moments in my life because with hard work and determination, I was able to achieve my own American dream.”

And she emphasized that “as an immigrant and a very independent woman, I understand what a privilege it is to live here and to enjoy the freedoms and opportunities we have.”

The first lady – in her uplifting speech – reflected on her work with children and her “Be Best” initiative –  a public awareness campaign focusing on well-being for youth and advocacy against cyberbullying and opioid use. And she laid out her second-term agenda as first lady should her husband be re-elected.

She also emphasized that women’s voices must be heard and praised her husband for building “an administration with an unprecedented number of women in leadership roles.”

The president’s reelection team is hoping that the first lady’s popularity will help her husband overcome one of his major weaknesses – his standing with female voters.

The most recent Fox News national poll – conducted earlier this month – indicated Biden with a 12 point lead over the president among female voters.

Trump’s the star of every night of the convention – but on Wednesday evening, the spotlight will also shine on Vice President Mike Pence, who will give his formal nomination acceptance speech.

Pence’s mission will be to showcase the administration’s record and make the case for another 4 years of the Trump presidency.

Also speaking Wednesday is another politician and fervent Trump supporter who like Pence may have national aspirations in the next White House race: South Dakota Gov. Kristi Noem.

Sen. Joni Ernst of Iowa – one of the few Republican incumbents facing a challenging re-election this year who’s addressing the convention – also has a slot on the third evening of the confab. So do conservative favorites Sen. Marsha Blackburn of Tennessee and Reps. Dan Crenshaw of Texas and Elise Stefanik of New York, and Lee Zeldin of New York, who one of Trump’s was staunchest defenders during the impeachment investigation and trial.

BONDI ON BIDEN’S POLITICAL CAREER: ‘THE PEOPLE WHO BENEFITED ARE HIS FAMILY MEMBERS, NOT THE AMERICAN PEOPLE’

Among the other speakers in the convention’s Wednesday spotlight will be Second Lady Karen Pence, outgoing Counselor to the President Kellyanne Conway, and the president’s daughter-in-law and senior campaign adviser Lara Trump.