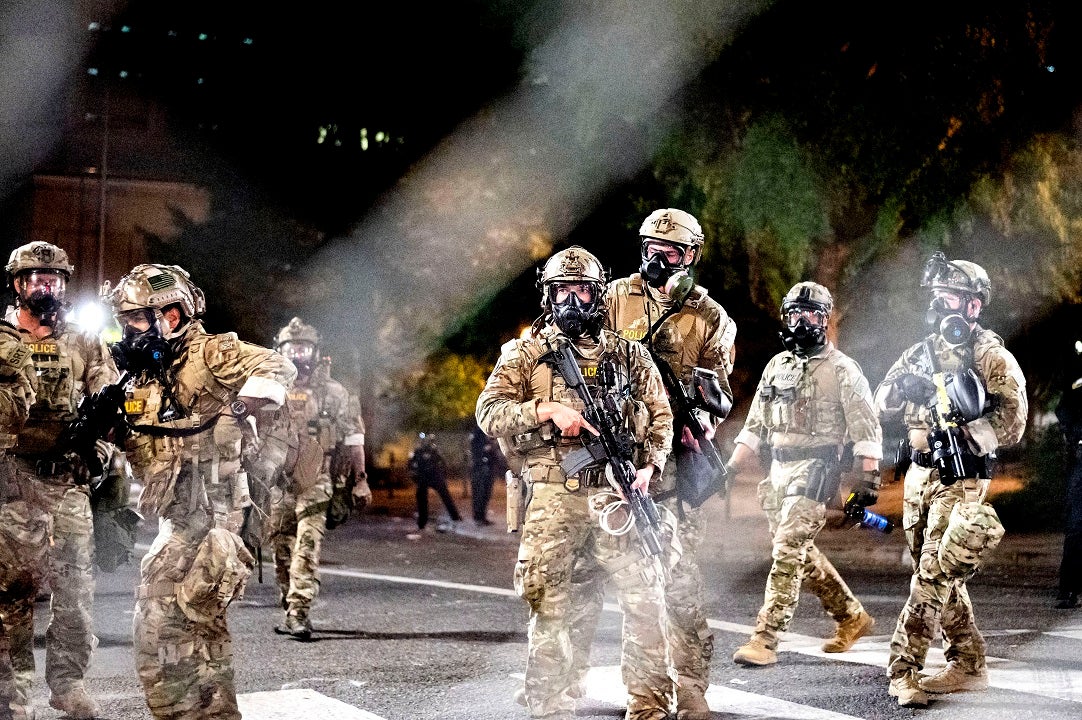 Several big-city mayors that have seen upticks in violent crime and escalating clashes between police and protesters are demanding federal agents be withdrawn from their cities — and any plans for more federal deployments be halted.

In two separate letters — one addressed to Attorney General Bill Barr and Acting Homeland Security Secretary Chad Wolf and the other to House Speaker Nancy Pelosi, Senate Minority Leader Chuck Schumer, both Democrats, and Senate Majority Leader Mitch McConnell, a Republican — the mayors expressed objection to the presence of federal agents conducting law enforcement activities in their cities without coordinating with local authorities.

“Deployment of federal forces in the streets of our communities has not been requested nor is it acceptable,” the letter reads.

The Trump administration has come under heavy criticism from Democrats and activists over the actions of federal agents during ongoing demonstrations — some of which have turned violent — against police brutality and racial injustice.

Many have been seen in videos circulating widely online wearing military gear without identification and whisking people away in unmarked vehicles. The letters cited responses by federal forces across the county against protesters without approval from local authorities.

Confrontations between protesters and police have intensified in several cities, some of which have also seen a sharp rise in gun-related crime. In Seattle, several city blocks were occupied by demonstrators for weeks, resulting in three killings and other crimes within the so-called CHOP zone. The city cleared out the area earlier this month after Trump excoriated local leaders for tolerating the unrest.

An increase in gun violence in Chicago and the recent killing of an 8-year-old girl in Atlanta also drew the attention of the federal government. Kansas City has also seen a spike in murders and gun violence.

Earlier this month, Barr announced the launch of Operation Legend in an effort to combat violent crime, slated to begin in Kansas City. The name was taken from LeGend Taliferro, a four-year-old boy who was fatally shot last month while sleeping in his apartment.

Justice Department officials told local media the program was being expanded to Chicago, which has seen a rise in gun violence over the past several years.

“If the President is truly sincere about wanting to help. There are a number of things that the federal government is uniquely qualified to do that we could use his help with. And they all revolve around the fact that we have way too many illegal guns on our streets,” she said.

In Portland, weeks of nighttime riots and looting prompted the deployment of federal forces to the city in an effort to quell the violence and destruction to infrastructure. On Friday, Wheeler hosted a news briefing where he demanded Trump to “keep your troops in your own buildings, or have them leave our city.”

Wheeler also accused him of using federal forces to bolster his sagging poll numbers ahead of the November presidential election.

Some Democrats have accused the Trump administration of sending unidentifiable agents to the city, a claim the Department of Homeland Security denies. Last week, Wolf accused local leaders of enabling mobs of protesters who have engaged in violent acts.

The letter to the congressional lawmakers accused the agents of escalating the civil unrest in the city.

“Importantly, in Portland they do not even appear to be complying with a federal court order regarding the use of tear gas and other crowd control tools,” the letter said.

They cited the challenges facing multiple governments across the country: the coronavirus, the economic downturn and the ongoing protests. Furthermore, they accused Trump of deploying federal forces for “political purposes.”

“But the President and his administration have demonstrated little interest in engaging with our communities in meaningful ways to address these challenges,” the letter said. “Instead, he is politicizing conflict, creating an environment of fear and mistrust, and raising the prospect of more deployments of federal forces… this is an abuse of power.”

Joe Biden ‘has been caught in repeated lies over Biden…