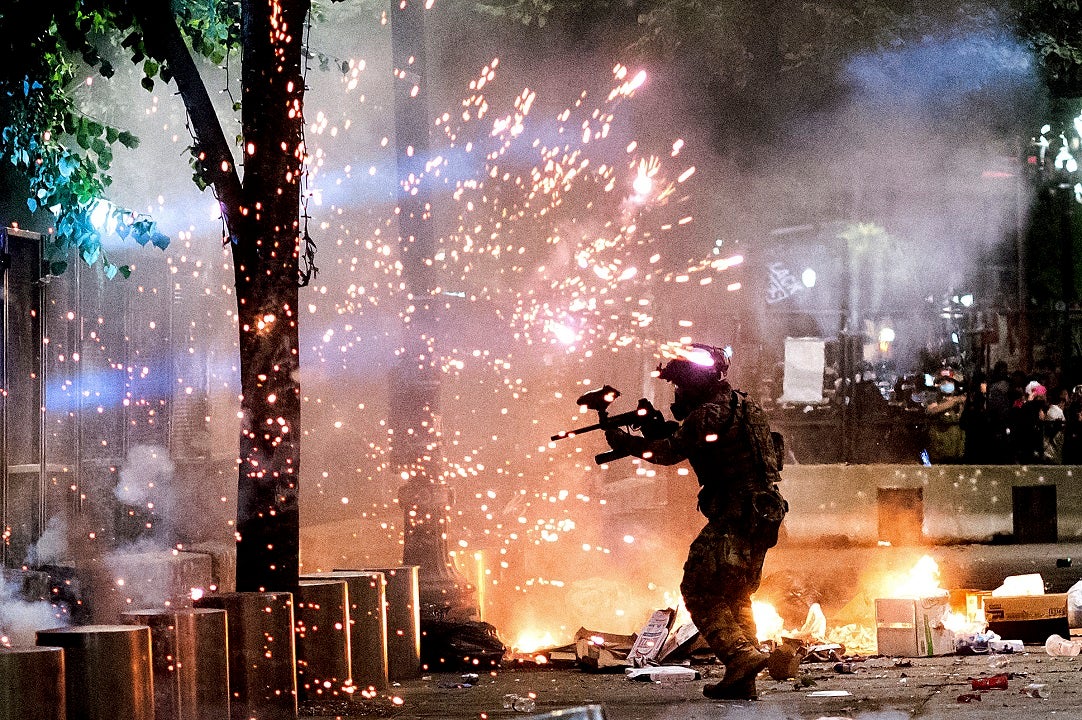 Several big-city mayors sent congressional leaders a joint letter Monday urging for legislation to prohibit the use of federal forces in their municipalities to quell protests and respond to a spike in crime, even as the Trump administration plans to send more agents to Portland, Oregon.

“This must stop,” the letter reads. “As demonstrated now in Portland, these federal forces have used the pretext of protecting federal property to also patrol streets, way outside of their lawful jurisdiction, arrest residents without cause and trample on Constitutional rights. These actions further erode trust in government at all levels; are de-legitimizing local law enforcement; and escalate, rather than de-escalate tensions.”

The mayors said any legislation should require consent and consultation with local authorities and that federal agents and their vehicles display visible identification at all times, unless on an undercover mission authorized by the U.S. attorney. It also stressed that agents should be limited to protecting federal property.

The letter follows another signed by the same mayors to the same congressional leaders to demand Congress investigate Trump‘s deployment of federal forces. Another letter to U.S. Attorney General Bill Barr and Acting Secretary of Homeland Security Chad Wolf called for the withdrawal of such forces.

Portland has seen two months of nightly demonstrations against police brutality and racial injustice evolve into chaotic and sometimes tense confrontations between protesters and police and federal agents. The heavily-armed officers have come under criticism for the use of tear gas and other crowd control measures, as well as allegedly refusing to identify themselves and pulling people off the streets and into unmarked vehicles.

Tear gas, a chemical agent that can cause severe eye and respiratory issues, skin irritation, bleeding and blindness, is legal for riot control in the United States. However, its usage in overseas wars was prohibited by the Geneva Protocol of 1925.

In a tweet last week, Pelosi called the agents “stormtroopers” who kidnapped and injured protesters in response to graffiti.

“Unidentified stormtroopers. Unmarked cars. Kidnapping protesters and causing severe injuries in response to graffiti,” the tweet read. “These are not the actions of a democratic republic. @DHSgov’s actions in Portland undermine its mission. Trump & his stormtroopers must be stopped.”

Dozens of U.S. Marshals will be sent to the city to reinforce the federal presence. Most of the clashes have occurred in a relatively small area downtown near the Mark O. Hatfield U.S. Courthouse, where some protesters have hurled objects at authorities or attempted to breach barriers.

Wheeler, the Portland mayor, was tear-gassed by agents last week during a tense visit with protesters. Several lawsuits have been filed in response to the presence of federal agents, including the alleged targeting of journalists and legal observers.

On Monday evening, Wheeler said he and Portland City Commissioner Jo Ann Hardesty wished to meet with Barr and Homeland Security leadership to discuss the potential removal of federal agents from the city.

“Commissioner @JoAnnPDX and I are calling for an immediate meeting with Department of Homeland Security leadership on the ground in Portland and with Acting Secretary @DHS_Wolf to discuss a cease-fire and the removal of heightened federal forces from Portland,” he tweeted.

Biden returns to DC to say farewell to John Lewis

Stirewalt reacts to Hillary offer to help Biden ‘any way I…