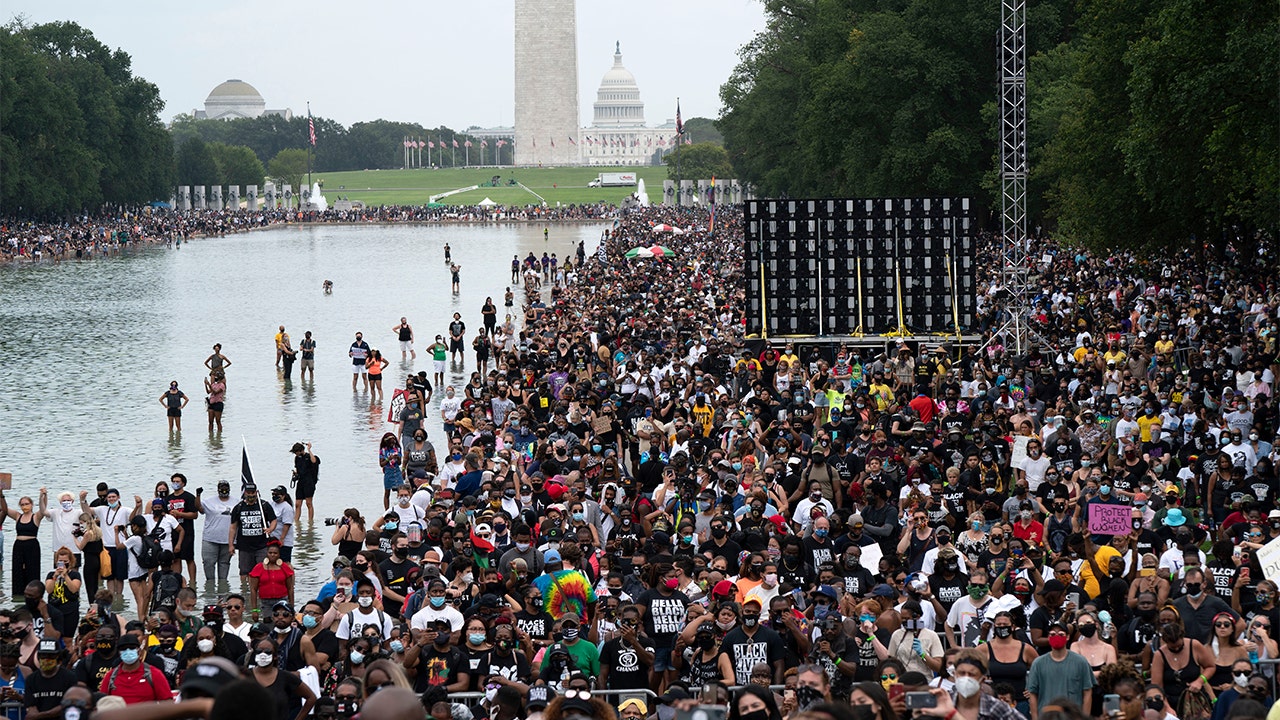 Thousands of protesters gathered in Washington on Friday to address criminal justice reform and racial inequality, which have sparked protests across the U.S. since the death of George Floyd while in police custody in May.

Demonstrators gathered for an event planned since June at the Lincoln Memorial to honor the 57th anniversary of the Rev. Martin Luther King Jr.’s “I Have a Dream” speech, given at the same location.

Friday’s march was deemed “Get Your Knee Off Our Necks,” in reference to the manner in which Floyd died after a police officer in Minneapolis placed his knee on Floyd’s neck for nine minutes.

Speeches were given by Martin Luther King III, members of Floyd’s family, Breonna Taylor’s mother and the Rev. Al Sharpton, who organized the event, along with many others.

“We come today Black and white and all races and religions and sexual orientations to say this dream is still alive. You might have killed the dreamer, but you can’t kill the dream because truth crushed to earth shall rise again,” Sharpton said. “Get your knee off our neck. Enough is enough.”

The march was first announced by Sharpton after the May 25 death of Floyd, which led to months of protests both peaceful and violent, contesting police brutality against Black Americans.

Friday’s demonstration followed the wounding of a Black man, Jacob Blake, who was shot in the back seven times by a police officer in Kenosha, Wis., as he walked toward his car last Sunday.

Blake was shot in front of his three sons, and according to reports from his family, is now paralyzed from the waist down. The three police officers involved in the shooting have been removed from their stations and the shooting is still under investigation.

“My generation has already taken to the streets – peacefully and with masks and social distancing – to protest racism,” 10-year old, Yolanda Renee King, the granddaughter of Martin Luther King Jr., said Friday from the podium before her father spoke.

She asked young people to join her in pledging to continue to fight and becoming the generation that unites.

“Less than a year before he was assassinated, my grandfather predicted this very moment,” she continued. “He said that we were moving into a new phase of the struggle. The first phase was for civil rights and the new phase is a struggle for genuine equality.”

Tamika Palmer, the mother of Breonna Taylor, a black woman who was shot and killed by police while in her bed sleeping in March, took to the podium Friday as the crowd shouted “Say her name, Breonna Taylor.”

“What we need is change,” Palmer told the crowd. “We have to stand together, we have to vote.”

She said that they need to pledge allegiance to truth.

“Black America, I hold you accountable,” she said. “You must stand, you must fight. But not with violence and chaos. With self-love.”

Many of the demonstrators wore shirts depicting former congressman and civil rights activist, John Lewis, who’s famous words were represented in Friday’s march as he often encouraged Americans to “get into good trouble” through protests and demonstrations.

Organizers were reportedly cautious about COVID-19 and took temperature checks and wore masks prior to entering the march, according to a local news outlet.

And despite the 90-plus degree weather — which the DC. Fire Department assisted with by providing misters, demonstrators marched to the Martin Luther King Jr. Memorial in West Potomac Park, near the Lincoln Memorial after the speeches ended.

Hair salon owner thanks supporters after more than $300G raised