Hundreds of thousands of protesters gathered Saturday across Washington D.C., including near the White House, to march against police brutality and racism in response to the recent death of George Floyd in police custody — part of protests that took place in cities across the U.S.

Black Lives Matter organizers were hoping to draw a million protesters, with groups of demonstrators gathering at the Capitol, the National Mall, and with thousands gathering near the White House. A law enforcement source told Fox News that an estimated 200,000 people came to protest in D.C. throughout the course of the day.

One crowd of about 2,000 people gathered at Malcolm X Park at one point and, after giving speeches and singing, began marching down 16th Street toward the White House, according to Fox News’ Kelly Phares. Protesters gathered in front of newly-installed high fencing that was keeping protestors out of Lafayette Park in front of the White House.

Authorities have expanded the fenced security perimeter around the White House, which now reaches to the outskirts of a park complex known as the Ellipse, near the National Mall. It comes amid concerns that the mostly peaceful protests seen in recent days could be marred by the rioting and looting seen at the beginning of the week and last weekend.

“We have a lot of public, open-source information to suggest that the event on this upcoming Saturday may be one of the largest that we’ve had in the city,” D.C. Police Chief Peter Newsham told reporters Thursday.

President Trump tweeted that there was a “much smaller crowd in D.C. than anticipated.”

“National Guard, Secret Service, and D.C. Police have been doing a fantastic job. Thank you!” he tweeted.

Protesters also demonstrated in San Francisco and New York City, as well as Philadelphia and Chicago. As of Saturday evening there were few signs of the violence that had marred previous protests in recent days.

It was not clear how many would show up for Saturday’s demonstrations, but #1MillionDCSaturday was trending on Twitter in a call for 1 million people to march on the capital.

Crowds applauded for D.C. Mayor Muriel Bowser as she walked along the portion of 16th Street that she renamed Black Lives Matter Plaza. Bowser has feuded with President Trump over the city’s handling of the protests, that devolved into riots earlier in the week.

Trump accused her of not doing enough to shut down the violence, while Bowser has pushed back on Trump’s calls for the use of federal law enforcement to quell disturbances. 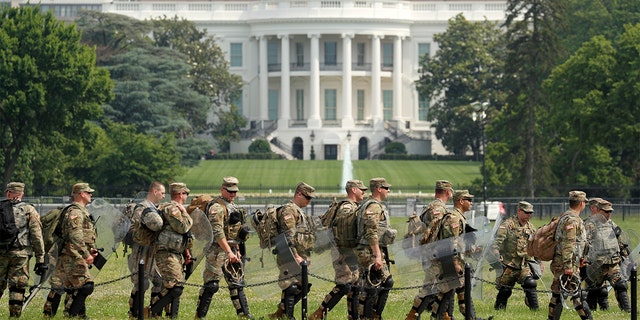 Uniformed military personnel walk in front of the White House ahead of a protest against racial inequality in the aftermath of the death in Minneapolis police custody of George Floyd, in Washington, U.S. June 6, 2020.  (Reuters)

Army Secretary Ryan McCarthy said Friday that local officials were estimating a crowd of 100,000 to 200,000 protesters.

Newsham wouldn’t commit to a number but predicted it would be smaller than the Women’s March in 2017, which drew roughly a million people.

Police announced Friday that large swaths of roads would be closed to make room for demonstrators Saturday.

U.S. Park Police told McClatchy DC it was using “intelligence to monitor upcoming events” but would not divulge details that could “pose a hazard to the public and police.”

But Bowser wants all non-D.C.troops out of the city. All 900 active-duty military police brought to bases around Washington following the civil unrest after Floyd’s death are heading home, the Department of Defense said Friday.

Bowser said she only requested 100 D.C. National Guard troops to line the perimeter of the White House, in a limited role and unarmed.

Protesters have lined the streets surrounding the White House every day this week.  On Monday, riot police cleared peaceful protesters out of Lafayette Square, using pepper balls and smoke canisters, so that President Trump could walk to a neighboring church for a photo op. 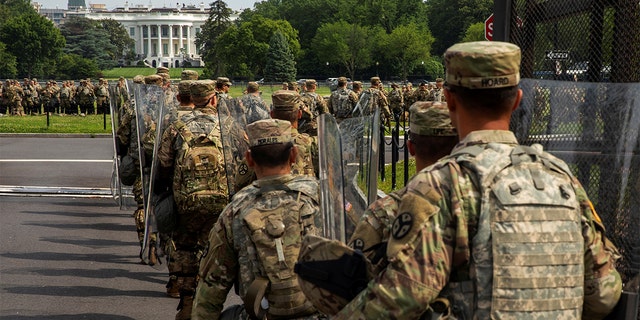 Uniformed military personnel walks into the secured White House area ahead of a protest against racial inequality in reaction to the death in Minneapolis police custody of George Floyd, in Washington, U.S., June 6, 2020.  (Reuters)

Since then protests have been largely peaceful with few arrests, and the city has not enforced a curfew since Wednesday night.

Across the nation, the number of National Guard troops mobilized across the country has doubled in the past four days. The National Guard tweet Saturday that 43,000 troops were deployed across 34 states and D.C. to assist law enforcement with civil unrest, while 37,000 Guard soldiers and airmen continue to assist with Covid-19 response.

Dozens of protests are planned across all boroughs in New York City, after Friday the Manhattan DA Cyrus Vance Jr. announced that his office would not prosecute protesters charged with breaking curfew or other low-level offenses. Protesters charged with low-level offenses “undermines critical bonds between law enforcement and the communities we serve,” the district attorney said.

New York City has an 8 p.m. curfew in place until Sunday night, after looters ransacked businesses, mostly at the beginning of the week. There have been a number of clashes between officers and aggressive protesters, but as the week has progressed, protests have grown more peaceful.  Police say they’ve arrested in the city about 2,500 people since the end of May.

On Friday, Mayor Bill de Blasio explained why he didn’t lift the curfew.

“Anyone who would say ‘Is it more harm than good?’ I would say no. We’ve had three really good nights after two really bad nights,” the mayor said. 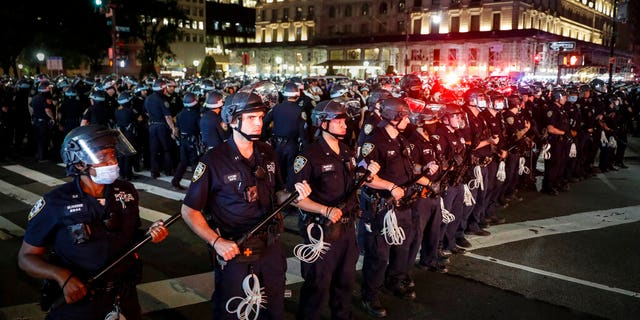 In Chicago, officials prepared for another busy weekend of demonstrations, and hundreds had already begun to gather in Union Park on Saturday morning. The city shut down a number of main streets and modified transit routes for Saturday to make room for protesters. Chicago’s 9 p.m. curfew remains in place over the weekend.

At the same time, thousands of mourners showed up Saturday to remember Floyd ahead of a second memorial service, this time in North Carolina near where he was born.

The mourners lined up Saturday morning for a two-hour public viewing of his casket at Cape Fear Conference B in Raeford, about 24 miles from Fayetteville. A private service for family members only begins at 3 p.m. local time but is being broadcast.

Border chief ‘not worried’ amid federal probes into…