How Biden, McConnell could find themselves in familiar role as negotiating partners 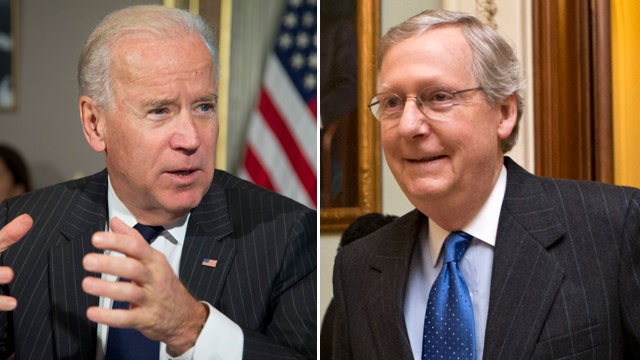 The freshman senator came to the floor to discuss a problem frequently raised by fellow Republican lawmakers — election fraud. But what his proposal had going for it was buy-in from a veteran on the other side of the aisle.

“When the Senate passes the omnibus drug bill, hopefully this afternoon, it will be passing as part of the current leadership package three hard-hitting measures against election fraud and corruption in our society. This amendment is essentially the Biden-McConnell Anti-Corruption Act,” Sen. Mitch McConnell, R-Ky., said in his Oct. 14, 1988 remarks, referring to his colleague, three-term Sen. Joe Biden, D-Del.

The amendment wasn’t adopted as part of the omnibus bill, but the alliance of Biden and McConnell would mark the first of many efforts to work together on legislation — bipartisanship that could prove invaluable if Biden becomes president.

Biden and McConnell tried unsuccessfully again in 1989 and 1993 to push through their anti-corruption law that would have imposed new federal penalties for voter fraud in state or local elections. But years later, when Biden was vice president and McConnell the Senate majority leader, they successfully hammered out taxing and spending deals when the Obama administration and the GOP-controlled House were at a stalemate.

They also co-sponsored several other bills in the 1990s and 2000s on law enforcement issues and foreign policy.

“There’s a reason ‘Get Joe on the phone’ is shorthand for ‘Time to get serious’ in my office,” McConnell said on the floor in December 2016 of the outgoing Biden.

That same year, McConnell named a medical research bill for Beau Biden, the vice president’s son who died in May 2015 of brain cancer. In his book, “The Long Game,” McConnell mentions how he worked effectively with Biden.

If Republicans hold the Senate and Biden defeats President Trump on Nov. 3, Biden and McConnell would find themselves in the familiar role of negotiating partners.

McConnell appears likely to win his own race in Kentucky against Democrat Amy McGrath. The fate of the GOP’s Senate majority is less certain.

Republican-held seats in Arizona, Colorado, Georgia, Iowa, Maine, Montana, North Carolina, South Carolina are in trouble, while the GOP is expected to pick up a seat in Alabama.

“Republican Senate candidates look safer than Trump,” Steve Voss, a political science professor at the University of Kentucky, told Fox News. Still, he said preserving the GOP majority may be a long shot if Biden wins.

“Biden and McConnell, if both win, will likely have their final victories. So they will both be looking to history, even if there is pressure from the extreme factions of their parties not to govern,” Voss said.

MCCONNELL ON BIDEN’S COURT COMMISSION PLAN: ‘COURT PACKING OUGHT TO BE COMPLETELY UNACCEPTABLE’

Biden, if elected president, would likely reach out to McConnell, former Biden senior adviser Moe Vela said, recalling a conversation with the vice president aboard Air Force Two in 2009.

“I may have even been talking about McConnell, I don’t remember, but I said ‘that blankety-blank Republican senator is full of blank,’ and Joe grabbed my left forearm and said, ‘Moe, you’re wrong. He’s my friend, and we both love our country,” Vela told Fox News.

He said Biden is not going to be held hostage by the far left.

“Alexandria Ocasio-Cortez and Bernie Sanders and ‘The Squad’ will be heard, but so will folks who are right of center,” Vela said of Biden.

One Biden-McConnell bill that could be ripe for bipartisan support in 2021 is the State and Local Law Enforcement Discipline, Accountability, and Due Process Act of 2007, essentially a police reform bill. Democrats recently blocked a police reform bill authored by Sen. Tim Scott, R-S.C.

“There is a certain time-is-right feeling for some sort of police or policing reform, but it’s not clear that this would be priority 1,” said Lindsey Cormack, a political science professor at the Stevens Institute of Technology who runs the congressional communications database DCinbox.com.

She compiled a list of legislation Biden and McConnell worked on in the Senate. “… I imagine that the earliest priorities of a Senate Leader McConnell and President Biden would be COVID-19 relief-related.”

Cormack added that the leaders could even push some version of their elusive anti-corruption act through.

“If people want freer and fairer elections and government processes, increasing the criminal and civil penalties for those who try to mess with either can be a reasonable, bipartisan approach,” Cormack said of the 1988 bill.

McConnell was also among other senators adding his name to a the Biden-sponsored National Child Protection Act of 1993, which sought to provide federal grants for states to better track convicted child abusers.

After Biden became vice president under Barack Obama, his first deal with McConnell came after Republicans won a House majority in the 2010 election, but before they took control. The Bush tax cuts were set to expire, but Biden and McConnell reached a deal to extend the rates until after the 2012 election.

In February 2011, McConnell hosted Biden at the University of Louisville’s McConnell Center, where the vice president opened by saying: “You want to see if a Republican and a Democrat really like one another. They do. They really do.”

By mid-2011, when Democrats and Republican were at a standoff over the debt ceiling,  it was again McConnell and Biden who worked out another deal.

Then, after the 2012 election, Biden and McConnell reached a deal on the “fiscal cliff” that increased taxes on only the highest earners, leaving the remaining Bush tax cuts in place.

“McConnell and Biden knew how to do business in a way Obama did not care to know,” said Voss, of the University of Kentucky. “McConnell is highly partisan, but you shouldn’t assume it’s only in a party’s interest to stop things.

“At the end of the day, if voters are grumpy about the economy or foreign policy or when people are sick, looking like problem-solvers helps a party.”

Was my vote counted? A state-by-state guide to tracking your absentee ballot