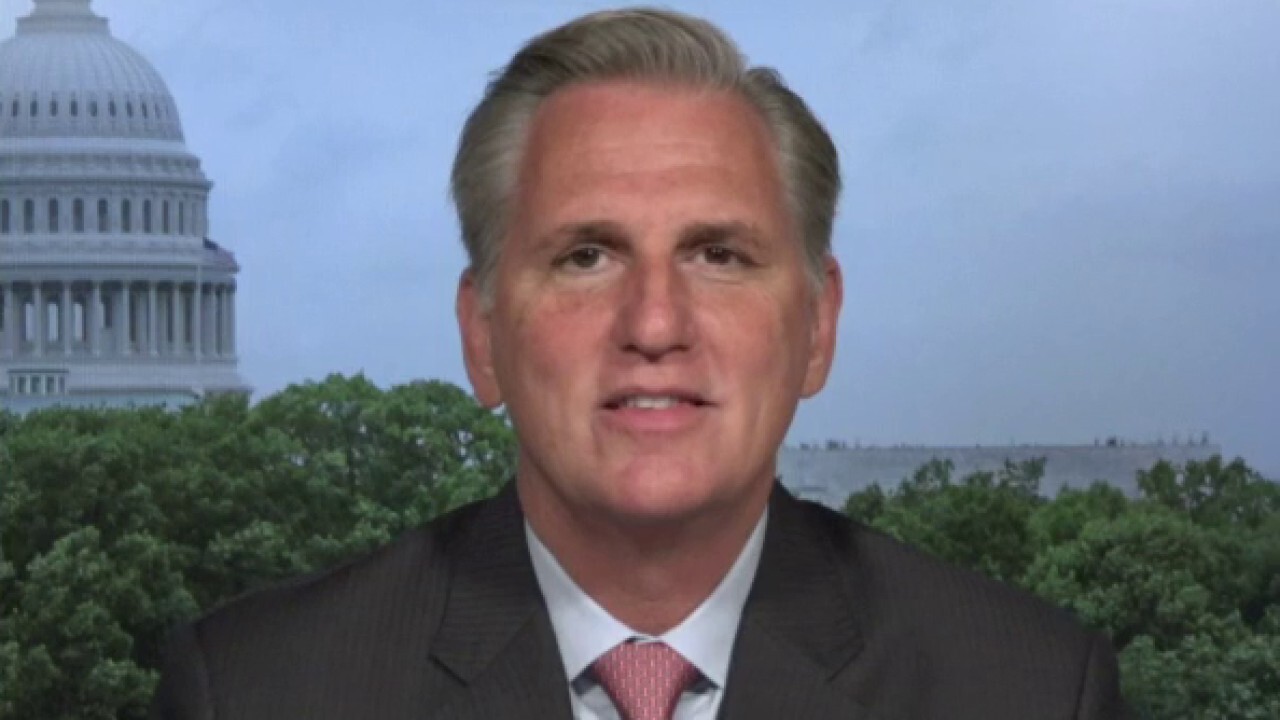 House Republican leadership said on Wednesday that bills passed by the House of Representatives under a new proxy voting setup aimed at preventing coronavirus spread “cannot become law” because, they claim, the voting stratagem that allows some members to cast votes on behalf of others under their explicit instruction is unconstitutional.

“Whatever the Democrats propose to bring up cannot become law because it is unconstitutional,” McCarthy said. “For more than 231 years, never have we seen a proxy vote on the floor of the House. This challenges the Constitution only to protect and empower a speaker. It violates the Constitution, it’s a dereliction of duty of its members.”

McCarthy accused Democrats of having different standards for themselves than for the American people. They are seeking to keep many members away from the Capitol – under a voting plan aimed at protecting members, staff and their families from the coronavirus – as states around the country reopen after lockdowns aimed at slowing the spread of the coronavirus.

The proxy voting plan, which allows members to send a letter to the House clerk giving another member the permission to vote in their stead, with explicit instructions on how to vote, was passed as part of a House resolution that also set up standards for remote committee hearings earlier this month. The special provisions could be renewed or modified for the remainder of the congressional term that ends in January.

McCarthy added that the proxy setup could serve as a precedent for other unlikely scenarios, which would be absurd and unfair.

“If the Democrats are successful in allowing a proxy vote to make their own rules, what stops them from making a rule that only certain people can vote or certain members can not have a full vote, a half vote?” he asked. “Nothing.”

McCarthy also cited comments from Senate Majority Leader Mitch McConnell, R-Ky., questioning the constitutionality of proxy voting, saying it is unlikely the Senate would take up measures passed by the House via a proxy vote.

“The Constitution requires a physical quorum to do business,” McConnell said last week. “Any House member has a right to demand an in-person attendance check. The Democrats’ new rule says one person may mark himself and ten others present, even if they are nowhere in sight. A flat-out lie. There will be enormous Constitutional questions around anything the House does if they fail to demonstrate a real quorum, but plow ahead anyhow.”

Rep. Mike Johnson, R-La., listed off language from the Constitution, including that Congress “shall assemble,” that a “majority” of each chamber “shall constitute a quorum” and that members of Congress will be immune from being arrested during their “attendance” of a session.

But Democrats are likely to question that argument because the Constitution allows the chambers to set their own rules, and the House and Senate regularly do business without a physical quorum. McConnell’s comments on proxy voting, for example, took place with just himself and one other Senator on the floor. The chambers can also pass legislation via unanimous consent or voice vote without a physical quorum present as long as no member objects.

That is the detail McCarthy leaned on when pushed about Congress’ habit of getting things done with less than half of its members in the room.

“Because anybody can object,” he said, responding to a question about passing bills via unanimous consent.

Democrats have downplayed the idea that proxy voting is something wildly outside of Congress’ norms. House Majority Leader Steny Hoyer, D-Md., has compared the change to a previous move by the House to move from an oral roll call of all its members to electronic voting in the chamber in 1973. The House conducts most roll call votes that way today.

Cheney said that some remote business could be possible, but said that Democrats were taking advantage of the situation for partisan gain. She did not elaborate on how letting some members cast ballots on behalf of others under explicit instruction to vote as the other members say would help Democrats over Republicans.

Cheney also said a report published by House Rules Committee Chairman Jim McGovern, D-Mass., had “good suggestions” for how to do business during the pandemic, and noted that the report said the proxy voting could set the chamber up for a legal challenge — as is now happening with Republicans’ Tuesday lawsuit.

She appeared open to remote voting instead of proxy voting, but that option presents its own Pandora’s Box of issues when it comes to cybersecurity and making sure each member’s vote is counted accurately.

On the specific legislation that is up for consideration via proxy vote, Scalise said Democrats should halt action on a renewal of the Foreign Intelligence Surveillance Act that was set for a vote on Wednesday, before President Trump Tuesday night urged Republicans to vote against it, the Department of Justice came out against the bill itself and an amendment that was set for a Wednesday vote, and McCarthy also turned against the legislation.

“I would urge the Democrats to pull that bill. Because even if it were to pass … it would only … pass with proxy votes, meaning the constitutionality of this program would be questioned for a program that’s already got its own taint on it,” Scalise said.

Scalise also cited alleged abuses of the FISA program as reasons why Congress should take more time considering the legislation.

McCarthy, in urging Pelosi to continue to take care of the House of Representative’s business in person, cited a number of other natural disasters and conflicts during which the body managed to continue to hold in-person voting, including the Spanish flu, yellow fever, the burning of Capitol during the War of 1812, the Civil War and 9/11.

“Congress has never flinched from its constitutional duty to uphold and assemble,” he said.

Trump set to announce Barrett as Supreme Court pick, as Dems vow to…

Trump speech at Michigan rally interrupted by ‘We love you’ chant