Here are five takeaways on the coronavirus pandemic from the latest Fox News Poll.

— More than 6 in 10 voters say the lack of available testing is a major problem, and many feel that way about the lack of a clear federal response.

— A majority wants to wait to reopen the economy, even if it prolongs the economic crisis.

— Approval has decreased since last month for those handling the response to coronavirus.

— The number of those concerned about getting infected is down, while the portion who know someone with the virus is up.

— The lack of physical and emotional contact is the biggest personal hardship.

Here are the numbers behind those findings:

Some 70 percent of voters are concerned about catching coronavirus, down from 76 percent in April.  That shift is completely due to a 13-point drop among Republicans, as concern about infection holds steady among Democrats and independents. 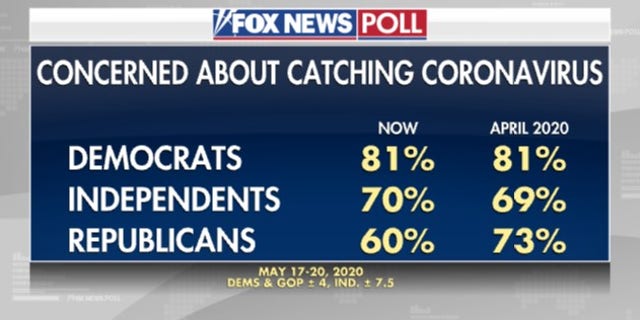 Overall, 38 percent personally know someone with coronavirus, up from 21 percent in April.  That number climbs to 55 percent among Northeasterners and 45 percent among those living in urban areas.

Many voters say the pandemic has caused them personal hardship, including a lack of physical and emotional contact with others (65 percent), lack of essential supplies (61 percent), loss of income (53 percent), loneliness (52 percent), and lack of food (39 percent). 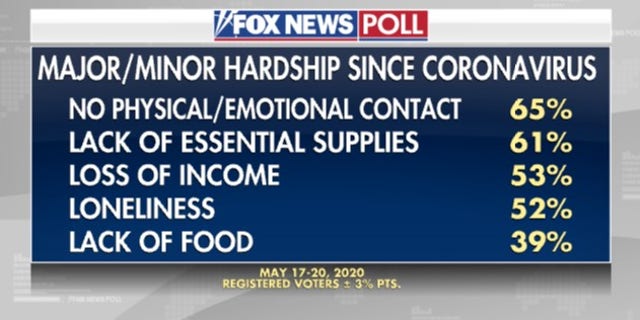 One in five (20 percent) believe the U.S. has the virus completely or mostly under control, while almost twice as many (35 percent) say the virus is not at all under control.  Another 43 percent sit in the middle and say it is somewhat contained.

As all states have now partially reopened, a majority, 55 percent, says they would rather wait to loosen restrictions, even if it prolongs the economic crisis.  Thirty-four percent want to open the economy, even if it means the public health crisis lasts longer.

More than 6-in-10 voters say the lack of available testing (63 percent) and the lack of clear guidance from Washington (61 percent) are major problems.  About 4-in-10 (39 percent) believe violations of personal freedoms are a major problem. 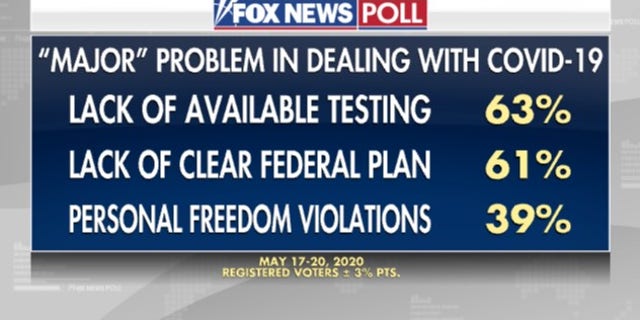 Infectious disease expert Dr. Anthony Fauci continues to receive high marks for the job he is doing — but not as high as last month.  Seventy-four percent approve, down from 80 percent in April.  The decline comes entirely from a 21-point drop in approval among Republicans (64 percent, down from 85 percent in April).  Approval is up 4 points to 84 percent among Democrats and up 3 points to 66 percent among independents.

Most voters, 70 percent, approve of their state government’s performance handling of the pandemic.  That includes majorities of Democrats (75 percent), Republicans (69 percent), and independents (62 percent). 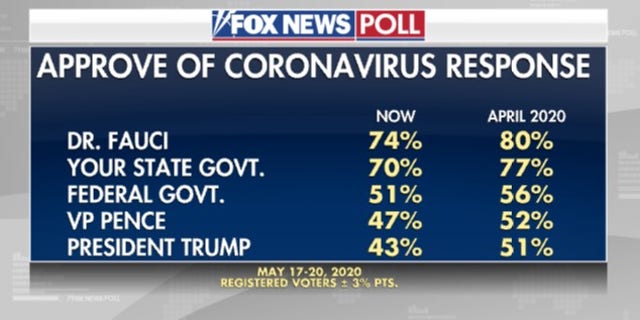 About 7 in 10 (72 percent) report wearing a mask all or most of the time when they are out in public, and 6 in 10 (60 percent) plan to get a vaccine shot when one becomes available.

Those most likely to wear a mask include Northeasterners, Democrats, seniors, and women.  Those least likely to do so include white men without a college degree, Republicans, men, and Southerners.

Conducted May 17-20, 2020 under the joint direction of Beacon Research (D) and Shaw & Company (R), this Fox News Poll includes interviews with 1,207 randomly chosen registered voters nationwide who spoke with live interviewers on both landlines and cellphones.  The poll has a margin of sampling error of plus or minus 2.5 percentage points for all registered voters.

Illinois lawmaker calls for Dem governor Pritzker to be held in…