DeSantis: Florida ‘not going back’ on coronavirus reopening, despite new case surge

Florida Gov. Ron DeSantis announced Tuesday that the state will not reimpose sweeping shutdowns amid rising coronavirus infections, saying that going back to lockdowns would cripple the economy without saving lives.

DeSantis drew the line even as Texas Gov. Greg Abbott last week ordered all bars closed, and Arizona Gov. Doug Ducey told residents to stay home and declared that the state was “on pause.” Just last week, after the state recorded 25,000 new infections in just five days and 9,000 in one day alone, Florida once again prohibited the on-premises consumption of alcohol at bars; there are no restrictions on occupancy at gyms or stores.

“We’re not going back, closing things,” DeSantis told reporters. “I don’t think that that really is what’s driving it, people going to a business is not what’s driving it. I think when you see the younger folks, I think a lot of it is more just social interactions, so that’s natural. Obviously, you had a lot of different activities going on in different parts of the state. … So that’s just the reality.”

Protests around the country, and in Florida, have seen a dramatic decline in social distancing in recent weeks. While data show that infections in Florida outpace new testing, the numbers also indicate that many of the newly infected are young and are not becoming seriously ill.

DeSantis added that doomsday predictions about Florida’s coronavirus numbers were off-base, and urged young residents to “protect the vulnerable” by socially distancing and steering clear of the elderly — stopping short of other governors, who have suggested residents should generally stay home.

“We’re open, we know who we need to protect, most of the folks in those younger demographics, although we want them to be mindful of what’s going on, are just simply much much less at risk than the folks who are in those older age groups,” DeSantis added. 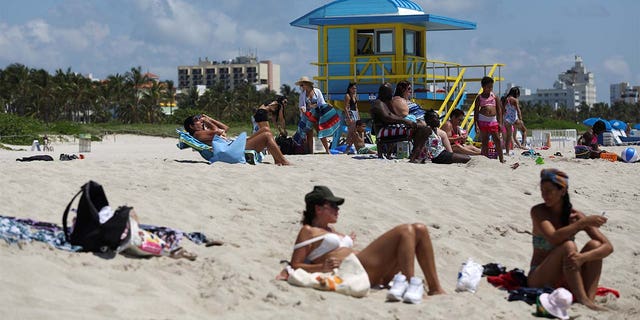 Beachgoers sunbathe as beaches are reopened with restrictions to limit the spread of the coronavirus disease (COVID-19), in Miami Beach, Florida, U.S., June 10, 2020. REUTERS/Marco Bello – RC2J6H9PQG3A

Earlier this month, DeSantis adopted a different posture, telling constituents that the worst was over.

“In our phase two, we will be going with bars being able to operate consistent with this guidance diminished standing room occupancy so basically outdoor seating with social distance, a certain amount indoors, but you’re seated to get served. I mean … go enjoy. Have a drink. It’s fine,” DeSantis said. “We want to kind of not have huge crowds piling in.”

At the same time, DeSantis has issued a stark warning to businesses that defy the state’s social distancing guidelines, threatening to revoke business licenses from bars and restaurants.

“If you go in and it’s just mayhem, like ‘Dance Party USA’ and it’s packed to the rafters, that’s just cut-and-dry and that’s not just an innocent mistake,” DeSantis said.

As Florida’s reported cases spiked to record highs the past two weeks, though, DeSantis’ administration ordered bars to essentially shut down again. Officials in New York and New Jersey have also debated slowing their reopenings as a result.

That move sent Kylie Davis, a 23-year-old bartender in Tampa, Fla., back to unemployment. She had returned to work May 23 after two months without a job, struggling to collect unemployment benefits from Florida’s backlogged system. The tips, she said, were good. 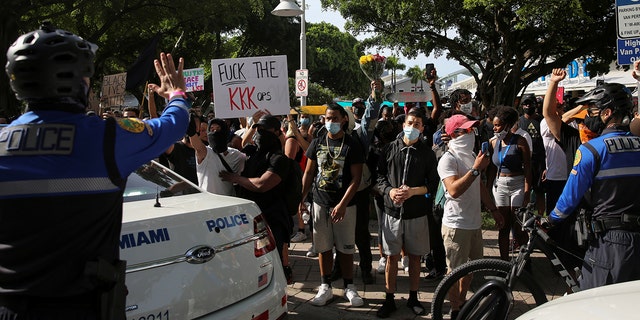 “People were so understanding,” she said, “that we had been out of work for a while and were extremely generous.”

Yet after a few weeks, Davis was coughing and exhausted and had lost her sense of taste and smell. On June 12, she tested positive for the virus and couldn’t return to work when Florida bars reopened.

The jarring reversal underscores what many economists had been stressing for months: That the economy and the job market can’t regain their health until business shutdowns have lasted long enough to reduce infections and most Americans feel confident enough to return to restaurants, bars, hotels, shopping malls and airports.

“It is the virus, not lockdowns, that dictates the course of the economy,” said Yongseok Shin, an economist at Washington University and a research fellow at the Federal Reserve Bank of St. Louis. “We cannot have a full economic recovery without reining in the epidemic.”

Marianne Williamson compares DNC Day One to a ‘Marriott commercial’

Schumer: VA must explain use of hydroxychloroquine on veterans to…

Trump argues Susan Rice has this ‘potential liability’ if Biden…