The governor’s budget through next year forecasts unemployment to climb to nearly 25 percent and for overall tax revenues to drop by about a quarter. It also calls for a 10 percent pay cut for all state workers.

“Nothing breaks my heart more than having to make budget cuts,” Newsom said during a Thursday press conference. “There’s a human being behind every single number.” 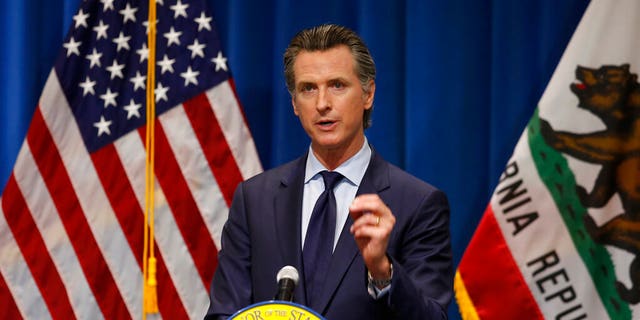 California’s financial downturn is cushioned by a $16 billion rainy day fund that had been set aside. Newsom’s budget, which will now be negotiated with state lawmakers, calls for spending the fund down over the next three years, starting with roughly $8 billion in the upcoming year. He’s also tapping two other reserve funds for another $1 billion combined.

The $203 billion budget he proposed Thursday represents about 5 percent lower spending than the current year, despite a budget hole his administration pegged at $54.3 billion.

Many of the cuts come from planned expansions of safety-net programs and social services he and other Democrats sought in the upcoming budget.

Budget documents show the 10 percent pay cut for state employees would save about $2.8 billion overall, though the reductions would not occur “if the federal government provides sufficient funding to restore them.”

California will seek the savings through collective bargaining with the unions that represent different workers, but the administration will “impose reductions if the state cannot reach an agreement.”

“We will find efficiency. You deserve a leaner government that’s more nimble, more effective and targets the needs of the most vulnerable,” Newsom said, adding that the pay cuts would also apply to him and his staff.

The budget decreases spending on K-12 education by nearly $7 billion compared to last year. Newsom said billions more in cuts to schools can be staved off by tapping federal coronavirus funding and reducing some tax perks.

Newsom said Wednesday his revised budget would include more than $200 million to increase the state’s preparations for natural disasters, including hiring another 500 firefighters and 100 support personnel.

Newsom had proposed a $222.2 billion spending plan in January that included a nearly $6 billion surplus. But that changed in March when he issued a mandatory, statewide stay-at-home order to slow the spread of the coronavirus that drastically reduced sales tax and other revenues and increased the number of people relying on safety-net programs.

Brennan, who sought to ‘unmask’ Flynn, claims release of names is ‘abominable abuse of authority’