Black conservatives started a campaign on Tuesday to save the Emancipation Memorial in Lincoln Park, Washington, D.C.

That statue depicts President Abraham Lincoln holding the Emancipation Proclamation and a Black man kneeling at his feet who is newly freed from slavery. The statue has been the target of recent protests and even D.C. delegate Eleanor Holmes Norton called to remove the “problematic”  statue.

“Although formerly enslaved Americans paid for this statue to be built in 1876, the design and sculpting process was done without their input and it shows,” Holmes Norton said in a statement. “The statue fails to note in any way how enslaved African Americans pushed for their own emancipation.”

The nonprofit UrbanCURE held an “Emancipation Celebration” Tuesday at Lincoln Park near the now fenced-off statue to promote their petition asserting the statue is “part of the heart and soul of our country.” 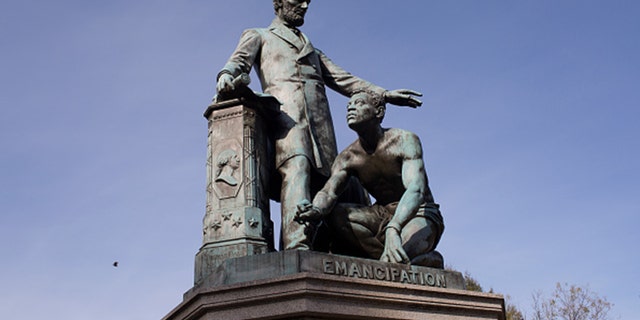 “Claiming ‘racism’ about this statue shows the ignorance of this movement. Black folk like DC Mayor Bowser and Congressional Delegate Eleanor Holmes Norton need to learn black history,” said Star Parker, founder of UrbanCURE, in a statement. “Archer Alexander is not kneeling; as a track star prepared to run a dash, the kinetic motion in this figure shows him just emancipated to stand and run his race as a free man.”

The statue was reportedly paid for by newly freed slaves in 1865.

The idea for the statue started with a formerly enslaved woman who wanted to pay homage to Lincoln after he was assassinated in 1865, according to the National Park Service.

Charlotte Scott, of Virginia, used the first $5 she earned after being freed from slavery to launch a fundraising campaign, the park service said.

Other funds were collected exclusively from formerly enslaved African-Americans, even though the organization running the effort and maintaining the funds was a white-run, war-relief agency based in St. Louis, called the Western Sanitary Commission, the park service said.