An attorney for Tara Reade, the woman accusing Joe Biden of sexual assault in 1993, on Monday urged the Office of the Secretary of the U.S. Senate to “reconsider” its decision not to release personnel records due to “confidentiality” concerns — and called on Biden to voluntarily turn over the large collection of his Senate papers, currently housed on friendly territory at the University of Delaware.

The attorney, Douglas Wigdor, authored a Medium post on Monday announcing that he had sent a letter specifically urging the Senate to turn over a complaint he says Reade filed in 1993 with the Office of Senate Fair Employment Practices, concerning the alleged harassment she experienced in Biden’s office.

Biden — who has repeatedly denied Reade’s allegations — has also called on the Senate to produce any such record, but the Senate’s legal counsel responded that the Secretary “has no discretion to disclose any such information as requested in Vice President Biden’s letter of May 1.”

“Your position that the Secretary is prohibited by statute from disclosing Ms. Reade’s Request for Counseling is without merit and not supported by the express provisions of [Government Employee Rights Act of 1991] or the applicable Senate rules,” Wigdor wrote.

“Sheer common sense,” he said, counseling against invoking confidentiality provisions to shield a record that both Biden and Reade want to make public.

Wigdor also sent a second letter to Biden himself concerning the Delaware papers. But, the former vice president has turned down that request, telling MSNBC last week that it wouldn’t be productive.

EXCLUSIVE: UNIVERSITY OF DELAWARE BOARD MEMBERS HAVE CLOSE TIES TO BIDEN

“The fact is that there’s a lot of things that — of speeches I have made, positions I have taken, interviews that I did overseas with people, all of those things relating to my job,” Biden said. “And the idea that they would all be made public and the fact, while I was running for a public office, they could be really taken out of context.” 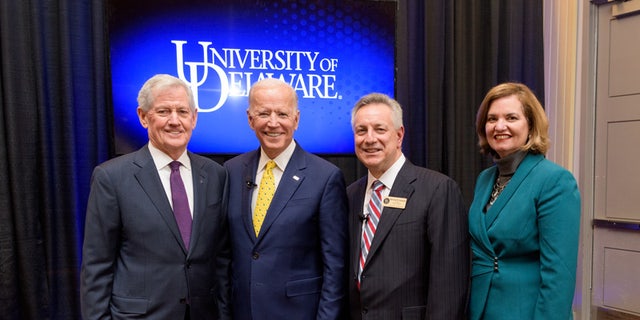 Wigdor charged in his letter that it was “obvious” that Biden’s request for the Senate to release his records “was disingenuous and sent knowing full well that the Senate (as it has) would defer to antiquated and vague rules procedures to keep the content of Ms. Reade’s Request hidden from the public eye, and protects a former, over 30-year Senate member.”

Wigdor added: “I would be remiss if I failed to note the similarities between your response to Ms. Reade’s accusations and your handling of Professor Anita Hill’s testimony during Justice Clarence Thomas’s 1991 confirmation hearing, mere months before the events underlying Ms. Reade’s complaint took place. … We hope your apology to Professor Hill and public statements about your shortcomings during Justice Thomas’s confirmation hearing do not ring hollow, and that you do not block a fair and diligent search of your Archives for records corroborating Ms. Reade’s allegations.”

BIDEN OPERATIVES ACCESSED SECRET DELAWARE RECORDS IN THE PAST YEAR

Numerous top officials on the board of the University of Delaware, which is refusing to release Biden’s Senate records despite an earlier promise to do so, have close personal and financial ties to the former vice president, records reviewed by Fox News show — and the chairman of the board even bought Biden’s house in 1996 for $1.2 million, reportedly a “top dollar” price given its condition.

Biden’s campaign, meanwhile, dispatched operatives to the University of Delaware’s library in the past year to rifle through his secretive Senate records there, Business Insider reported — raising the possibility they accessed documents related to Reade’s accusation. Wigdor has also represented several women accusing Harvey Weinstein of sexual misconduct.

The Associated Press ran a story earlier this month that prominently pointed to Wigdor’s donation to President Trump’s 2016 campaign, while minimizing his work representing a slew of women.

Earlier this month, Biden called on the secretary of the Senate to essentially resolve confusion over where personnel complaints from the 1990s would be held, after demanding hours earlier that any complaint from the former staffer who accused him of sexual assault be located and released.

The scramble came after Biden publicly denied Reade’s allegations. In doing so, he had urged the secretary of the Senate to seek out such records from the National Archives.

But who has them and who controls them turned out to be a murky issue, with the Archives responding that the Senate technically has “control” of any such files from 1993, the year in question.

One possibility, based on the numerous statements on the issue, could be that the Archives technically has such records but the Senate controls them. But Biden’s letter appeared to treat this as an open question.

This confusion followed another debate over whether the University of Delaware should also be involved.

Reade, who said that she had filed a complaint after the alleged incident, had called for a search of Biden’s senatorial papers, which are kept at the University of Delaware.

Mayor of small Northern California town to resign for dismissing…