Voters in California will decide this November whether to restore affirmative action in college admissions and government contracting.

The proposal would reverse a 1996 constitutional amendment approved by 55 percent of voters that banned “preferential treatment” based on “race, sex, color, ethnicity, or national origin.”

Wednesday’s 30-10 vote in the state legislature gave the measure the two-thirds majority required to put it on the ballot followed hours of emotional and personal debate.

“I know about discrimination. I live it every day,” Democratic state Sen. Steven Bradford, who is black, said to his colleagues, according to the Sacramento Bee. “We live it in this building. Quit lying to yourselves and saying race is not a factor. … The bedrock of who we are in this country is based on race.” 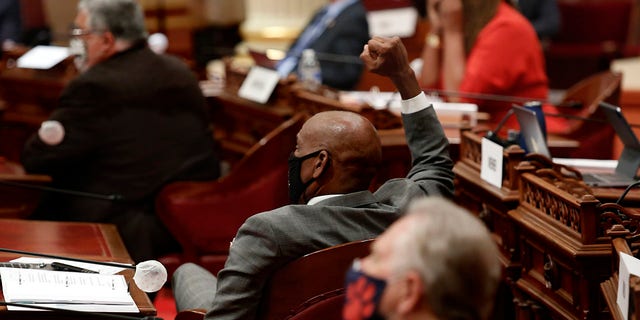 California state Sen. Steven Bradford, D-Gardena, center, raises his fist in celebration after lawmakers agree to place a proposed Constitutional amendment on the November ballot to overturn the state’s ban on affirmative action programs, at the Capitol, in Sacramento, June 24, 2020. (Associated Press)

Six years ago, an effort to get affirmative action on the ballot died in the Senate after Asian-American advocacy groups argued it would unfairly disadvantage Asian-American students who make up high percentages at some colleges, The Los Angeles Times reported. The same groups are expected to oppose the measure again, the Bee reported.

“This bill is rescinding very simple but powerful language from our Constitution that makes it illegal to discriminate against someone for ethnicity or race in the course of public employment,” Republican state Sen. Ling Ling Chang, who is of Taiwanese descent, said. “The answer to discrimination is not more discrimination.”

Only one Republican, Scott Wilk, voted in favor of the measure.

“We need to start at the level of K-12 and giving parents the opportunity to be able to choose the best school for their children and not make them stay in the ZIP Codes in which they are living in,” she said, according to the Times.

Democratic state Sen. Susan Rubio, who is Latina, said when she went to her college counselor in high school she was told “that Latinas, that I wasn’t college material.”

Nationwide protests demanding racial justice in the wake of George Floyd‘s police custody death have brought issues like affirmative action to the forefront.

Coronavirus: What went wrong with the UK’s contact tracing app?

Brennan, who sought to ‘unmask’ Flynn, claims release of names is…